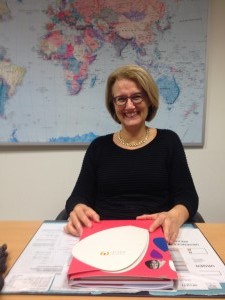 Marie-Fabienne Muyle is a general practitioner trained in Tropical Medicine. Since 1998 she works at the Travel Clinic of CHU St. Pierre, Brussels, the largest such clinic in Belgium. Fore over 10 years she also worked in a Family Planning Centre and at the School Health Service of the City of Brussels. Marie-Fabienne shares her experiences of awareness-raising and screening of FGM at the Travel Clinic.

How were you confronted with FGM in your work?
« I first became aware by films which were part of a training at the Family Planning. Later, by the GAMS and INTACT service trainings.

It was at work at the Travel Clinic that I was confronted with the problem of FGM for the first time. We meet people who travel around the world, including families who return to their country of origin for the holidays. A few years ago, I met a family of two parents and three children. I found the behaviour of the parents during the consultation really intriguing . While addressing the issue of the price of the hepatitis A vaccine, which is quite expensive, they began to talk with each other in their own language. They said that given the cost of the vaccine the boy wouldn’t go with the family on the trip. I was very surprised. Why the boy when one of the two girls was of school age and had to take some days off school to leave? I then addressed the issue of FGM with the parents. They reacted very badly and I told myseld that in fact they were planning to go for that! The boy was very upset at not being able to go, and the girls did not know why they were going and not their brother. We knew from the school doctor that there were also two older girls in the family, both cut. My suspicions led me to contact the GAMS and INTACT so that they could contact the family. Unfortunately, the communication failed with the parents, and ultimately it was the police who intervened to collect the children from school and have them placed in temporarily care… At that time, there were not yet any procedures in place to deal with these kind of situations….

I also remember a case where the mother was already sensitized. She wanted to return to her country and present her daughter and she asked me “but what can I do, my mother and family will be there? »… To help her I wrote a letter for the family. At the beginning, when we don’t have tools, we improvise…! Later INTACT and GAMS developed the Prevention Kit including the passport “stop FGM”, the interview guide and the risk scale. I recommend my colleagues to have this kit on hand.

I also remember another time when I addressed the issue with a mother during a consultation. She said that she was aware of the practice and that it was out of the question to let her daughter go through it. To protect her daughter, she left with the boys, leaving the girl at home. The girl was of course very angry with her mother, she didn’t understand why she couldn’t go! She saw it as a punishment. So, my role was to try to reconcile the girl with her mother, explaining that when she was older she would understand her mother’s decision. »

Were you also confronted with FGM during your time as a school doctor?
« Yes, I met children who had undergone FGM. I especially remember a consultation with a little girl from West Africa who was in nursery school. By wanting to make a rapid evaluation of the child’s pubertal level, as is done in school medicine, I saw the frightened look of the child and her small body stiffen. I understood that something had happened and as I was already a little aware of the issue of FGM I thought it could be that. My fears were confirmed by an endocrinologist. »

How do you talk to people about FGM at the Travel Clinic ?
« If a family goes to a country where FGM is practiced I try as often as possible to approach the subject with the parents. At first I try to find out if it is a practice that is done in their community. After that I deal with the health and the legal issues– Often people have already heard about it in other services. For me there are two main areas of intervention: raising awareness in the families that may be involved and detecting a potential or actual risk of FGM. Many mothers I meet are already aware of the risks. Some have even fled with their daughters so that they do not suffer… »

Do you think your fellow doctors are aware of FGM?
« It should be noted that this issue was not at all addressed in medical school. When I started as a doctor I didn’t know about FGM at all! Even when training in Tropical Medicine, which I did in 1997, it was not a subject that was discussed…. We were talking about other things, fistulas resulting from complications of childbirth, for example, but I have no recollection of hearing about cutting or infibulation, if that was the case it was skimmed over very quickly…I don’t know why … Were the teachers not aware of that? Fortunately things have changed and today this aspect is taught in General Medicine as well as in Tropical Medicine in Antwerpen. At the time, I was very surprised to learn thatin Egypt, for example, this concerned a large majority of women!
Now that I am aware of FGM, I try to educate my colleagues. I bring them flyers from GAMS and INTACT, the prevalence card … It’s not always easy. Recently, a colleague came to me and said, “Ah, I heard that you had a case of FGM!” “… I replied” yes, I told you about it at the time, 7 years ago … ». 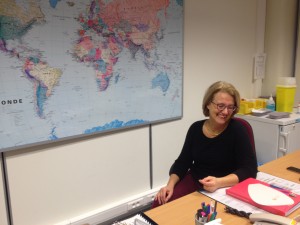 It’s also difficult for doctors to know if the country that the family is visiting is a region concerned by FGM or not…
The work is done through a network. I work mainly with gynaecologists at the CHU, as well as with specialised organisations (GAMS and INTACT). We also need to work with general practitioners, nurses, midwives, social workers … Staff in the reception also have to be made aware because they are the ones who know if the family finally decides not to vaccinate certain children because of the cost of the vaccines. If, for example, a family decides to leave without the boys, as was the case with the family I met, it is suspicious… you have to ask why. It would require training for everyone. This can be done, but it requires that people be somewhat sensitive to a more psychological aspect of the consultation.

Moreover, the boosters for the vaccines are done by the general practitioner so we rarely see the same people
again. If they come back to us in spite of everything, we ask the question “have you already been here? », we can re-contextualise an old trip and talk about certain topics, including FGM … General practitioners must also be trained to diagnose FGM. It’s not always that easy. If the girl has had a type 1 and returns to Belgium several weeks later, the wound is healed so it is not necessarily easy for a doctor who is not trained to recognise. »

What are the difficulties that you are confronted with?
« The big problem is the lack of time, we see too many patients for is to be possible to address the issue with all the families involved. I may miss some cases, in fact I’m sure I do… Here we have five doctors in non-stop consultation between the months of May and August. We had to limit to 250 patients a day … That’s huge. I have seen up to 70 patients per day during holidays! The consultations take place in the space of a few minutes … In these conditions it is very difficult to address the question of FGM after all the other questions: vaccines, the prevention of malaria and diarrhoea…

Moreover, we mostly see families who are obliged to vaccinate their children. These are people who go to countries where the yellow fever vaccine is mandatory, mainly in sub-Saharan Africa and parts of South America.

Another problem is the lack of statistics. When we look at the annual statistics we don’t know where the patients are going. It would be nice to have grids that every doctor fills with information about the country where the persons are going, to get more statistical data. And then there is no follow-up… The doctor doing the follow-up is not the same as the one who did the vaccine. I cannot be sure that the girls I had in consultation a few years ago were not cut afterwards…. For families there is also the economic factor. People come only if they are forced because they do not always have the means to go to the doctor…»

What do you think about the future, do you hope that this issue will be addressed more in Travel Clinics?
« Yes I think so. There are new people coming in who are interested in this issue. Our future Managing doctor recently distributed kits to each doctor in the Travel Clinic.
There have also been training courses in the City of Brussels for the PMS (Psycho-medico-social) and the PSE (school health) centres. In my opinion, it’s necessary to make everyone aware, starting with the person who makes the registration at the reception. The secretary should have access to a reference list of addresses that she could give to patients.
The tools are important but giving a tool without raising awareness serves no purpose. I am also in favour of networks between services and professions. For example, if I have a doubt here in the Travel Clinic, I can contact the general practitioner or school medicine. »

Marie-Fabienne also spoke at the symposium organised by GAMS and INTACT on 23 October 2015 on the Istanbul Convention. You will find her intervention in the Records of the colloquium (in French) : Dossier du colloque.