We met Samia Youssouf, community worker and head of the Liège branch of GAMS. She has been fighting FGM for many years, in Belgium and Djibouti. 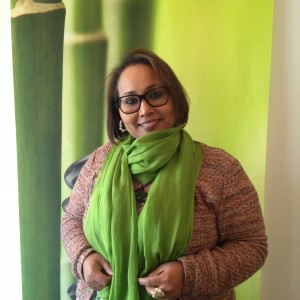 What led you to fight FGM?
“I come from Djibouti, a country where all women are cut. The prevalence of FGM is more than 90%. Very young girls are victims of FGM.
I decided to start combatting this scourge after going to live in Tunisia for a year at the age of 20. I met Tunisian friends and asked them if they had been cut as I thought was the case for all Muslim women. They told me they didn’t know about FGM. I was very surprised and I was very angry to learn that it’s not practiced in Tunisia even though it’s a Muslim country, as in Djibouti it is done in the name of religion. When I returned I did some research, to learn why it’s practiced, which countries are practicing it… “

So it was when you went to a country that didn’t practice FGM that you realised this, had you ever talked about it in Djibouti?
“We don’t talk about it in Djibouti, it’s a taboo subject. I was born in 1972 and cut at the age of five. But I learned that when I was little my daddy (May his soul rest in peace) had clearly told my mother not to have their daughters cut. Unfortunately, my father’s position did not protect my sisters and I, as soon as my father left on mission my mother had us cut.

Working in Belgium…
When arriving in Belgium in 1999 Samia meets Khadidiatou Diallo, president of GAMS. In Liège, where she lived, there were no specialised services on FGM (female genital mutilation). With a group of activists Samia participated, in 2007, in the establishment of the Liège Collective against FGM.

“I was very touched by the issue of female circumcision, as a woman, a mutilated woman, I thought it was my duty to protect little girls. That’s why I made it my combat and my job, first as a volunteer from 2007 to 2011. “
From 2011-2015 Samia had a contract to work on FGM at the Louise Michel Family Planning Centre. She has been working at GAMS Belgium since January 2015, which has opened an office in Liège, where there are many asylum seekers. She is responsible for the activities of the Province of Liège.”

“I changed employers but the job remains the same. Either we go to the women who have undergone FGM, in the Alpha class (learn to read and write for adults), to the National Office of Birth and Childhood (ONE), in training schools… Or, people come to us. I meet families concerned, mothers and fathers, we give individual support and we work with different partners such as Family Planning Centres… Women come to see me and if necessary I send them to other services for medical or legal care. We also have women’s groups’ activities. I have a consultation within the ONE and I speak at Centres for asylum seekers. Most of the people we meet are asylum-seekers from countries in Africa: Guinea-Conakry, Ivory Coast, Liberia, Niger, Somali, Djibouti, Sudan, Ethiopia, Eritrea … professionals, future midwives, nurses, SA …”

Samia also conducts field missions in Djibouti. She has accompanied, on several occasions, the NGO Respect for Change to raise awareness about FGM. In 2012 she participated in a campaign in Djibouti where important personalities condemned the practice.

“We were doing awareness-raising in the refugee camps south of Djibouti (Ali Addeh), then we were going North … The main weapon of Respect for Change is mainly the media, they don’t raise awareness among 20 people but use radio and TV to reach a larger number of people. They work with documentary films. They go to several countries, such as Burkina Faso, Senegal … In addition to Respect, the NCHR [National Commission on Human Rights] has also provided me with valuable support for these missions in Djibouti.”

“FGM is something that marks you for life, a memory that we can’t erase. We have to recover psychologically. It is a practice handed down from mother to daughter for centuries, something very deep-rooted. It is very important that we, women affected by the FGM, can testify of the impact it has had on us.”

What was the reaction of people in Djibouti?
“When I returned to Djibouti for the first time as part of my field work, I somewhat feared the reaction of the community. But I was pleasantly surprised. As a “cut” woman from Djibouti, I was seen as having legitimacy to talk about this subject, that I know very well. People were not hostile, instead they were debating it. People were telling me ‘but why tell us not to cut anything? It may grow back as hair does… It’ll itch, it’ll do this, it’ll do that’. So I said ‘no, you’re afraid of what you don’t know, the clitoris is an essential organ for a woman’s development, you should leave it be’. Finally, we were well received, we didn’t have the door closed on us instead we were helped in our work.”

Have you also led other awareness-raising actions in other East African countries?
“Yes, as part of my job at Respect for Exchange I also went on a mission to Addis Ababa, Ethiopia and to Hargeisa, in Somaliland.” 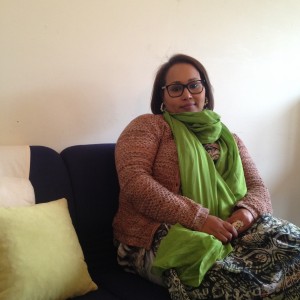 What do you think are the differences between doing awareness raising on FGM in Belgium compared to countries where it’s practiced?
“In our country [in Djibouti] we go to the heart of the tradition. It really takes a lot of arguments to be able to prevent FGM. Whereas in Belgium it’s different because there are laws that can be applied. In Africa, even if there are laws they are not enforced, there are no convictions. In Djibouti, for example, FGM is illegal but there are no convictions. We are still at the awareness level. When more than 90% of women have undergone FGM in a country, like Djibouti, it’s difficult to enforce the law. Also, here people face less social pressure because the family is often thousands of miles away. In Djibouti the grandmothers make sure that the tradition is upheld, they say ‘it’s up to us to decide, it’s not up to the parents to decide’. The pressure is much greater in Djibouti than here.”

What arguments do you use in your awareness-raising, in Belgium and Djibouti?
“The religious argument is important. People say the practice is done in the name of Islam. It is important to say that the Muslim religion never said that the practice is necessary. In reality you don’t gain anything because you are cut, it is not requested by religion. I also explain that we do not have the right to control the sexuality of women, women have the right to fulfilment. It must be explained that a girl who has undergone FGM will not have the same development than one who hasn’t, it has consequences on her health and sexuality. We must counter the religious argument, that a Muslim woman must be cut, it is not true, and there are many Muslim countries that do not practice FGM! We must change attitudes.”

Some people criticise the fact that international NGOs, with people who are not concerned by FGM, come to Africa to say that FGM is bad, have you ever encountered such arguments?
“Indeed, I think it’s very positive that a woman who has gone through it, like me, come to Africa to raise awareness. That’s why Respect for Change chose me. It’s true that it’s not the same thing when a foreigner, a stranger, points his finger saying ‘it is torture, it is necessary to stop’. This is valid for my work in Belgium too. A woman concerned is well placed to tell her story, to explain the consequences of FGM on her health, during childbirth, at the time of sexual intercourse. And to say ‘in the name of what do we have to be different from other women?’ For me the strength of GAMS Belgium is to have community workers from different countries where FGM is practiced.”

Do you think there is an ongoing change in Djibouti?
“I would say that 10 years ago it could not have debated so openly, talked about on the radio … Things have changed. Today there is less taboo, people speak more easily of FGM in Djibouti. I have the impression that there have been great efforts made, the State of Djibouti has condemned the practice. But we must continue to raise awareness. The prevalence remains high. People have to change their behaviour. I hope there will be a decrease in Djibouti. This is the case in other countries, in Senegal, for example, the rate of FGM was very high a few years ago, and today the prevalence is around 25%. It’s a victory. I hope other countries will follow.”

And in Belgium, how are the awareness-raising actions going?
“When I do awareness-raising for groups, people are prepared for our visit and I am generally well received. Sometimes we meet people who have never heard of FGM. I also get requests from services in the context of families who go on vacation to their country of origin. Parents never tell us openly ‘I am going to have my daughter cut’, they know that the services are against FGM and that the Belgian state condemns it. We have discussions with the parents, we explain that even if they send the girl to be cut in the country of origin they can face charges. For my part, I have never heard of a family who had their daughter cut here in Belgium.”

Can you share with us a positive memory of your years of combatting FGM ?
“My personal victory is my daughter, she is uncut. Within my family, those still in Djibouti, FGM is decreasing. My mom did not have her last daughter cut. It’s a victory. I raised awareness in my family, I talk about it to my mother, my sisters, my brother … It’s a very positive thing. My daughter is intact, I managed to protect her. In the same way, when I see other little girls stay uncut, that’s what brings me joy. I see young girls who came as babies with their mothers and that these mothers fought so that they were left untouched…

And women who tell me ‘we like coming to your workshops, we meet friends, it’s our breath of fresh air’. We can see that we do them good. I am very happy when I see people receiving asylum. They call us when they have their papers, to thank us. It’s good to see that we really help people.”

A few closing words?
“I hope FGM will be abolished… at least decrease. We must continue to raise awareness, we must not give up. If we continue to talk about it, people will eventually hear.”