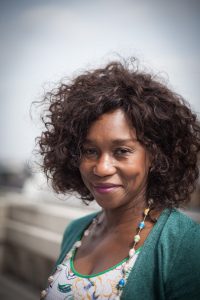 Fatoumata Sidibé is a member of the Brussels Parliament. Of Malian descent, Fatoumata lived in Belgium with her parents from the age of 2 to 7 years old. She then returned to live in Mali before returning to Belgium some thirty years ago. Holder of a master’s degree in social communication and journalism, she is particularly interested in women’s rights and it was while working for AMINA magazine that she met, twenty years ago, Khadia Diallo, president and founder of GAMS Belgium which had just been created.

Fatoumata Sidibé has worked in various fields such as communication, publishing, public relations, journalism, marketing and development cooperation. Feminist and secular activist, she also co-founded the Belgian Ni Putes Ni Soumises (neither whores nor submissive) Committee. Then she turned to politics. Her main dossiers are women’s rights, secularism, and the fight against discrimination, racism and exclusion, as well as employment…

Putting her feelings of injustice into words

What led to your commitment to women’s rights?
« When I was little, in Mali, I was really revolted, because it was really not a progressive country, there was polygamy, forced marriage, the repudiation of women, FGM … Girls had less access to education and boys were privileged. I saw all these inequalities and I was revolted, I did not understand! Although absorbed by these observations, I could not necessarily put it into words.… »

« Later, when I finished my studies in Social communication and Journalism at UCL, I started writing in the French magazine Amina. My first two articles were entitled “African women between tradition and modernity” and “Excision and infibulation, why destroy women’s genitalia? “… it was the beginning of my writings, I was able to put words on what I had already thought when I was very little… »

The struggle of African women is also present in Fatoumata Sidibé’s novel, “An African Season”, published in 2006, which features women, African, who fight against the discrimination with which they live.

Encounter with the founder of GAMS Belgium

« As a journalist, I wanted to give a voice to women who were fighting for their rights. This is how I got to interview Khadidiatou Diallo for AMINA magazine, at the very beginnings of GAMS Belgium. It was a revolution to see women as engaged as she was. What was also new, is that so far we had seen mostly European women talk about FGM. There were negative reactions, people said “but who do you think you are, talking about that?” There was a need to hear African women, who had really experienced it (FGM), speak out against this. »

Until then, we mostly saw European women talk about FGM. It was necessary for African women who had actually experienced it to speak out. Today, Europeans who work on forced marriages and FGM know that they must rely on resources in the countries themselves!

Perspectives of a Malian expat on Development Cooperation 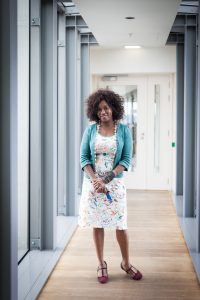 « Before getting involved in politics, I also worked for NGOs, including the Ingrid Renard Funds and Doctors of the World. In 2000, I was sent on a mission to Mali for a Health project. It was a shock. I realised that at the time, as an African, a woman, young, I had less credibility and legitimacy than the white European people who came to Mali to work in NGOs. It was very difficult for me to have appointments, to be taken seriously. I told myself ‘it’s crazy, in Europe we suffer discrimination and I go back to my country and there I also face discrimination!’. I came back with a sense of frustration and a willingness to change the image of development cooperation. I also found that in development projects, they did not always respond to the needs of the population and did not sufficiently take into account gender relations. »

« I have the impression that things have changed, Africans are contributing a lot to development, and the Europeans who are working on these causes, in this case forced marriage and FGM, know that they must rely on the resources in the countries themselves! ».

Do you think that FGM is a priority for Malian women, compared to the other problems they face?
« Yes, because FGM is a dangerous practice, a fundamental violation of human rights and an attack on dignity, physical integrity, and life. It is also a question of public health. Putting an end to FGM and other violence towards women is a matter of law and will also address other women’s priorities, such as enabling them to survive financially. Healthy girls can more easily access education and employment. Of course, change takes time and we have to move forward with the constraints. »

Raise awareness, “recycle” circumcisers and, as a last resort, prosecution

Currently, there are several lawsuits in Burkina Faso against women, circumcisers, mothers and grandmothers, for their involvement in the practice of FGM on little girls. In Europe, we know that there have been several convictions in France, while in Belgium there has never been a trial. What is your opinion on the use of the law?

« For me the trials concerning FGM should be conducted against the heads of families, the men, rather than the mothers or the circumcisers. It’s easy to blame women only. Women are the guardians of traditions, good or bad, it is their responsibility. They are both victims and executioners. Why bring a lawsuit against the heads of families, would it make sense? Because if they said ‘no!’ it would be no! The responsibility must change sides. FGM is not a woman’s affair. It is also with the complicity, authorisation or pressure from fathers, brothers, spouses … Their silence implies complicity and consent. Their commitment is essential to fight against this scourge. This is why we must mobilise men in the fight against FGM. If we played a video of the actual “excision” to men, many would refuse to let this happen to their daughter, sister, etc. »

« Obviously, prosecution is not enough. It is also necessary to raise awareness and ‘recycle’ the circumcisers. When they say “I took part in that but then I put the knife down” it has a real impact. At the level of awareness, we must not only raise awareness of parents, communities, including young people through Sex education in schools, we must also train health professionals, social assistants, legal professionals. That said, I am convinced that we will not put an end to FGM without prosecutions… »

For a universal feminism and non-negotiable human rights

« I am n favour of a universal Feminism, it is not a question of imposing a model of feminism at all, but I think that certain rights are not negotiable! Human rights do not vary depending on the origin, religion, culture. »

Human rights do not vary depending on origin, religion culture

« At the Belgian level, I am in favour of more controls when families travel to countries of origin where FGM is practiced. In my opinion, there is no reason that the practice would disappear with immigration, especially since some families have not been in the country for very long… That’s why we need to increase the spead of information on the issue. For example, families go through the Town Hall for permission to travel with a minor. For me,  saying “you are from a country where FGM is practiced, in Mali for example, when you come to recover a document or a passport to be able to travel, you must be informed of the existence of the specific law in Belgium which incriminates the practice of FGM since 2001”..for me this would not reinforce stigma. I oppose any cultural relativism. In my opinion, if a European parent had his/her daughter cut, whether or not to prosecute  would not even be an issue! … »

« In addition to women’s rights, I am also very committed to other gender issues including LGBT rights and in particular transgender people. I met with the association Genres Pluriels who told me: « Surgery on intersex children, we call that genital mutilation! From the moment we decide unilaterally, to choose the gender, the sex, of the child without consent, is a mutilation. You have to let them choose for themselves. « I fully endorse this claim, it is a matter of persons self-determination. »

« So then, should this issue be addressed in the law on FGM…? I don’t know at all, it’s an interesting question that the trade associations could look into. In any case, for me, there should be more convergence between feminist and LGBTI associations.… »

Towards more recognition of the work of field associations
You have been supporting GAMS Belgium for 20 years, but as a Brussels MP you also have a good view of public institutions… According to you, what role can the Belgian authorities play in the fight against FGM?

« Belgian Law condemns FGM since 2001. But there are still some affected people who don’t know that these practices are prohibited here. More awareness raising is needed to remedy this. When it comes to prevention and support, public authorities rely on grassroots associations. We hear politicians say “we did this, we did that, we gave funding”. But no, they have granted funding which come from the General society, so that grassroot associations can do the work and make up for the insufficiency or lack of action by the public authorities… » 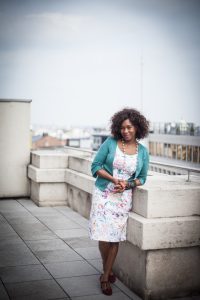 « A great amount of administrative work is required from the organisations,  they have to fill in project proposals, make follow-up reports, and all this in order to do the work, that in reality, should be done by public authorities… The fact that our country is divided into several authorities does not make it easy for them! Today, associations spend almost more time on admin than on the ground. The System  favours associations with the necessary skills to ensure the administrative burden, not necessarily those in the field. That’s why, in my opinion, public authorities should subsidise the voluntary sector to ensure their sustainability and their capacity to reach as many people as possible. The great difficulty for grassroots associations is to secure their funding. Even though funding has increased, it isn’t enough and often funding is not structural. Field associations remain dependent on unpaid volunteers. »

« I would like to conclude by paying tribute to the immense work done by NGOs. It is this extraordinary capacity for commitment, mobilisation and citizen solidarity that nurtures hope and can help change the world for the better. »