Thanks to a partnership between the StoryAtelier association and GAMS (and funds granted by Alter Egales following a call for projects), 8 women had the opportunity to create, from A to Z, a video telling a part of their story. Three days of a Digital Storytelling workshop filled with emotions-, solidarity and learning…
We met with Marie Bryon to learn more about their work and also about this tool.

First of all, can you introduce yourself?
Marie: « I’m a journalist. Following one of my articles for ‘Femmes d’aujourd’hui’, I met photographer Christophe Smets. We had wanted to work together on a problem that particularly interested us: FGM. Thus was born the project ‘Excision, my way of saying no’, with GAMS Belgium and journalist Céline Gautier. »

The discovery of Digital Storytelling
« When I moved to Germany, I met Astrid Nierhoff and Melina Garibyan and discovered their association, StoryAtelier, which offers Digital Storytelling. The tool really pleased me. As a journalist, I also write testimonials, I translate people’s feelings and emotions, but I often thought that it would be more powerful to be able to help them express themselves with their own voice. This is what Storytelling allows, thanks to simple tools that are within the reach of all. » 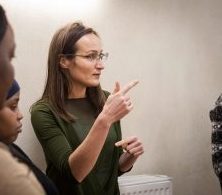 « I am not really very “computer minded ” to begin with, I followed the training course of storytelling, I discovered editing software and voice work, searching for images, sounds … And I emerged really enriched, not only technically, but especially humanely. This experience allowed me to understand how we consider the workshop and to reassure the participants in case of doubt. There is almost always a moment when we say ‘I’m not going to get there’ … But we get there! In the end, everyone has their movie. It’s a great moment and we all feel very proud! »

But what is « Digital Storytelling »? 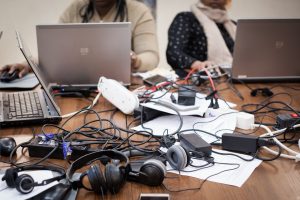 Digital storytelling, also known as multimedia storytelling, refers to a film of a duration of 2 to 3 minutes on a personal theme. “The workshop takes place in groups and normally lasts three days, from 9am to 5pm. On the first day, the group gets to know each other, then a creative workshop is offered so that the participants gain confidence in their ability to tell a story. Each participant is accompanied in the writing of their story, and the participants also help each other. At the end of the afternoon, each reads their story to the group.

The second day is more technical: we go into the process of searching for images, videos and music. Then, one after the other, each participant records their story, in a « studio »adapted for the occasion. This is an important step, which is made hidden away from view and any noise. Finally, on the last day, participants work on their soundtrack (voice and music) and editing. Step by step, they become familiarised with new tools»

At the crossroads of art therapy, autobiographical stories and group therapy, the creation of a personal video makes it possible to embrace an experience and to become detached.

Once their videos have been created, participants have the choice to keep it for themselves, share it with their loved ones or to broadcast it more widely.

«Digital storytelling can also have a “media” aspect, when authors agree to broadcast them. These autobiographical videos allow, indeed, the person who discovers them to have a better grasp of an issue, a community, a reality that is foreign to them. Carried away by the genuine emotion of the story, he or she can identify more with the author and develop empathy. That’s why more and more NGOs are using digital storytelling as a communication tool. »

Setting up a project with GAMS 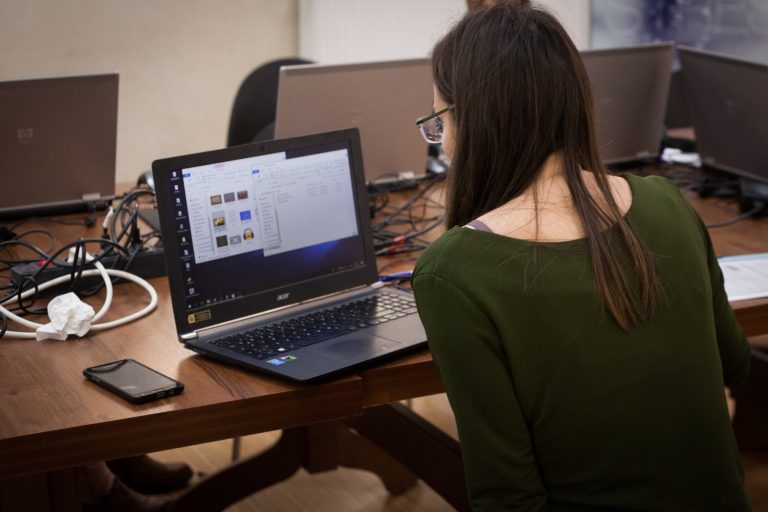 « When I discovered digital storytelling, I wanted to use it to work with vulnerable women, because in my opinion it’s a way to express yourself, to give voice and to distance yourself while becoming stronger. I think for the people involved in the process, there is a before and after workshop.
I immediately thought of GAMS; I thought it would be a great tool for their audience. This is why I contacted the association, which asked for a subsidy from Alter Egales to allow two groups of women to participate. »

The first Storytelling workshop with GAMS was led by Marie and her colleague Astrid in Liège in January 2018. Two GAMS psychologists and a community animator were also present. Eight women, all GAMS beneficiaries, participated in this four-day workshop. 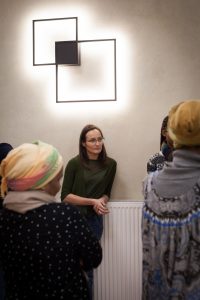 « It was a great experience for everyone. Each could choose the part of her story she wanted to work on. Every story was very intense; some dealt with FGM, but other topics were also discussed, such as forced marriage, violence, exile or stigma due to disability. The week was emotional for everyone. The workshop closed with the projection of the videos. »

What next?
« There were two psychologists with us. At the end of the workshop, they offered individual follow-up to the participants. At that moment, no one felt the need, saying they felt like they were at the end of the process. On the other hand, they expressed the wish to meet later to do something together. The workshop forged links between them. »

A second workshop is planned for the end of April with another 8 women selected by GAMS.

« We will use the experience of the first workshop to further in individual coaching and set up a workshop even more adapted to the specific needs of this group. I’m really looking forward to it! »