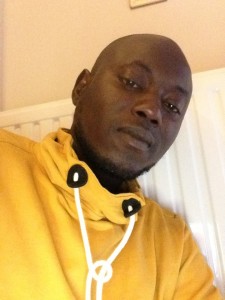 I am Seydou Niang. I come from Senegal but I consider myself to be a human being who comes from everywhere. A citizen of the world. Origin doesn’t matter when it comes to what I do, as I promote human rights in general, no matter where the person comes from, as long as they are human. This is the first thing for which one should fight, and about which one must raise awareness.

When I lived in Senegal, during the 2000s, I worked for an NGO called Tostan  which focuses on human rights in general and also deals with the issue of FGM. But at that time, I didn’t know a lot about the consequences of FGM, because I was born in it. In my family, all the girls are cut. And I never saw… I never considered it to be a harmful practice that brings about complications and danger. When I worked for that NGO, I became aware of the problems linked to the practice. At first, I couldn’t believe it because my mother and my sisters went through it. How can it be a violation of Human Rights, how can it cause suffering, if my mother has done it to her daughters?! This is why I was skeptical. At first, I couldn’t understand why it should be seen as harmful.

Then I went deeper, tried to understand, I faced all the justifications as well as the new information I got regarding the danger of the practice.

The first explanation that was given to me, and that put me at unease, was that it was linked to Islam. I grew up in a Muslim community made of hard believers. So I was afraid to say “It’s violence, it’s harmful even if it’s an obligation in the religion”: how can we question God’s will, if it’s an obligation? But when I asked the Imams of my region, all of them told me that it was no obligation but a recommendation. But I already knew that Muslim scholars do not always agree on the historical texts that are “recommendations”. I also knew that a recommendation – that is to say the sunnah – is a way of life to imitate the Prophet. It is no obligation.  It’s… its like having an idol, like when someone likes Michael Jackson and copies his life. It does not mean that if you don’t copy his life, you don’t like Michael Jackson anymore, or that your life doesn’t include him. You can love an idol. You can try to live as close to him as possible. But if you don’t perfectly imitate what that idol does, it doesn’t mean that your love towards this person diminishes. In other words, in the case of Islam, it doesn’t mean that our faith has diminished. I kept on thinking and told myself: “But even in Islam, if something compulsory is discovered to be a danger for one’s health, it becomes null and void”. I knew that already: even praying and fasting are not compulsory if it can affect your health. Even more so in the case of recommendations.

As I hosted activities with women in villages, I came to gain their trust. From then on, I got testimonies which confirmed what I was told during my training about the harmful consequences of it during my training. This is how I finally got engaged in raising awareness for the abandonment of the practice. First of all because I feel affected by it, through my close family circle and my community. And the methodology of that NGO seduced me… The fact that FGM is anchored even if it is harmful, if it has existed for a long time and maybe people who do it, like me – I didn’t but I lived in it – don’t know that there are complications linked to the practice. It’s such ignorance that makes people keep on practicing it. And the best way to make them understand, is to respect them and not judge them for what they do, and allow the person to listen to you and hear your message. This is roughly how I came to work on the issue of FGM.

When I arrived in Europe, I was lucky enough to keep on working on the issue because there was a branch of Tostan in France, where I worked for 2 years. Working with migrants. And recently, when I arrived in Belgium, I knew GAMS Belgium. I came closer and… here I am.

On which project do you work in GAMS?

I work on a specific projet that is, in my opinion, essential in the process of raising awareness about the practice, that is to say the involvement of men. I think that a society is a whole when men AND women are taken into account. Up to now, actions mostly focus on  women who are the main victims of it. But what is neglected, most of the time, is that men too are affected by it: in their marriage, when their partner has undergone FGM, and they are not indifferent to her suffering. They cannot remain indifferent to that phenomenon. More than that, in most communities, when there are complications, men are the ones who work, so they have to pay for the medical charges. Important is to make men understand that the practice affects them. Maybe they didn’t take time to reflect on the way it could affect them. We have to make them see, for them to involve themselves in the fight, for their voice to support the fight.

How are the people involved in the project going to manage it?

The project on which I work is called “Men Speak Out”: it is an European project that is led simultaneously in Belgium, in the Netherlands and in England. GAMS Belgium coordinates the project with its partners: the Institute of Tropical Medicine of Antwerp (that supports the qualitative part of the research), Himilo Foundation for the Netherlands, Forward for England. The steps to be implemented are the following:

First a qualitative research to determine their position and opinion regarding the practice. Information will be gathered on basis of individual interviews and focus groups. It is said most of the time that men are the ones who force women to be circumcised and that they wouldn’t like to marry uncut women, as they are afraid and all. But only a few studies give voice to men, allowing them to express what they really think, so that we can go past speculations. It is time to let men speak out. I know a lot of men who are for female genital cutting and a lot who are against it.

The second phase will consist of selecting between 15 and 20 men in the different countries where the project is going to be implemented – in Belgium, in the Netherlands and in England – and train them on issues like Human Rights, gender, and FGM as such: what it is, the complications, the justifications, the counter-arguments. And so, try to create, together with them, tools for raising awareness. In this part, there will also be times for encounters organized by the partners and trained people in order to create a network.

And, finally, the last step will be a quantitative research that will focus on the Guinean community of Belgium. It is a choice based on the last prevalency study on FGM in Belgium, showing that the most represented practicing community at the level of Belgium is Guinea. The purpose of this quantitative research is to have an insight on the impact of migration on the perception of practices and on the behaviour of migrants.

A man working on the issue of FGM is not a common phenomenon. To what kind of reactions were you confronted?

In Africa, when I started raising awareness on the issue, even some of my close relations said “Why do you care? You are a man and we are talking about female genital cutting. It’s a woman’s thing. Aren’t you ashamed of talking about the genitalia of women and all? You have others things to do than that.” But I had worked enough to think that yes, at first, one may think that it only affects women, and only women ought to speak about it and not men. But as I said, it is an issue that affects everybody: women are victims, and those women are my sisters, my nieces, etc. I cannot be indifferent if my sisters of my nieces suffer from a practice that should not exist. Also important is that I have had stories with women who were cut and women who weren’t. I knew some who suffered… And as I said earlier, I suffered from seeing them suffer that way. While it should be a moment of pleasure and enjoyment. So… they suffer directly. But also, some pleasant time I should have spent with them… I did not… So there is sort of a frustration… and suffering. This is what I try to make people believe. Even if it is not the case of all excised women,  there are still thousands who suffer. And their suffering affects me as a man. They may be women, but they are human beings above all so…

And are women in general glad to see a man who takes interest in that issue and stands for them?

Yes. Given that in most communities in which FGM is practiced, women do it, and now they are aware of the harmful consequences. They begin to understand that it is wrong and wish to abandon it. But the fact that men don’t speak about it, can restrain their newly-developed courage to talk about the practice. But if some men stand up and join the movement to say “enough, we don’t want it!” It can motivate them, it can give them hope to know that some people understand that yes, there is a suffering, and it prevents one to blossom. I do think so, yes.