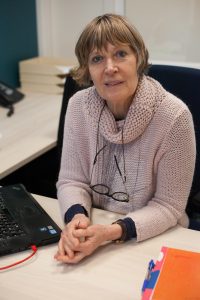 The presence of GAMS community facilitators in ONE consultations in Liège dates back to 2010. We met with Marylène Delhaxhe, a paediatric counsellor with the ONE, to talk about the collaboration between the two organisations in the prevention of female genital mutilation.

How did you become interested in the issue of female genital mutilation?

« As a paediatric expert at ONE (National office for childcare), I was made aware of the risk of FGM in young girls. I was also a member of the Houtman Fund, which supports actions and research-actions for children in difficulty in the French Community of Belgium and which for many years has financially supported the work of GAMS. I had the opportunity to represent the ONE in various meetings for the implementation of the Network for Concerted Strategies FGM, as well the realisation of tools and training courses for professionals »

The survey showed that 4 consultations in the region of Liège were heavily attended by the target audience. The consultation at Saint Marguerite, was the most concerned since it lists 89 families from the countries at risk. The Feronstrée consultation where Dr. Delhaxhe works also brings together people from African countries where FGM is practiced.

« It was as a result of this state of affairs that we established a collaboration between these two ONE consultations and GAMS. A GAMS community facilitator was invited to participate in some medical consultations to discuss with women and families in the waiting room. It was a kind of meeting between the families, from countries where FGM is practiced, and the facilitator, who knew the African cultural context and could approach the subject more easily. If there was a desire to go deeper into the subject there was a separate room that was made available for an interview. »

« I felt that for the families, especially for the mothers, it was a really important contact, it allowed them to come out of their isolation, as migrants, and to speak frankly with someone who understood their situation… »

An opportunity for addressing FGM

« The fact that this topic is being addressed by GAMS community facilitators, and also by the ONE’s doctor and medico-social worker, is very important. Prevention is reinforced when discourse is accompanied by people who understand the problem, and have sometimes experienced it themselves. One day we could perhaps imagine this kind of collaboration on other themes, to call on ‘experts through experience’ »

In addition to the issue of FGM, the presence of community facilitators also allows migrant women to address other cultural issues or even sensitive topics such as domestic violence or isolation.

« I see a great need for contact among some migrant women who are isolated from their families and who are going through really difficult situations. The activities of GAMS are important for them to talk about. It is crucial that these women be able to have support and attend the other activities proposed by GAMS. »

Do you address the issue of FGM easily with the families?

« Yes, for me it doesn’t seem difficult. In my consultation, the MSW has often discussed the subject at home, so parents expect it. I ask them, ‘Is there still a lot of family tradition of excision (cutting) for little girls in your country? ’ »

« That said, sometimes I have a doubt that everything is said when the medico-social workers or I approach the subject. This is why the presence of a GAMS community facilitator is important. I am really positive about the work that has been done with them. »

Do you feel that the issue of FGM is generally well integrated within the ONE?

« Yes, I think that at the ONE level there is real recognition of the need to address the subject of FGM. That does not mean that it’s easy to set up! Medico-social workers (MSWs) and doctors have received information, but are not regularly confronted with those concerned and there are a large number of issues to be addressed in children’s consultation. »

« There is still work to be done, of course, it’s the same in all areas of prevention. Remember that as a doctor you usually see 5 children / hour, 12 minutes per child … It’s not enough time to do or address everything! »

Last year Dr Delhaxhe redid a survey of people affected by FGM in the ONE consultations in the region of Liège. 40 consultations responded to the questionnaire. 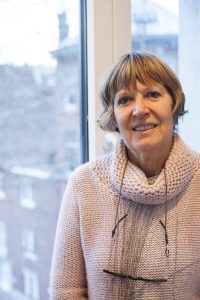 «Unfortunately, not all consultations responded to this survey. That said, we know that at least 199 families followed by the ONE come from an FGM-related country and that this corresponds to 391 children. 27 consultations are involved, 18 of which have a sufficient number of children to collaborate with a community facilitator. »

« We also looked at whether the consultations had the necessary tools on FGM. Normally there should be a kit and a professional guide in each consultation but the survey shows that this is not yet the case … »

What do you think has changed since the beginning of this collaboration?

« Parents seem more informed than before about the legal aspect and the prohibition of this practice. Those who have been to asylum seekers centres already know about GAMS. The others, who came by family reunification for example, do not necessarily know… Today I meet only parents who say ‘yes, it is done at home, but me no, no question’. I feel like I do not have to do so much about raising awareness. But the risk of returning home still exists. I know many families who have chosen not to travel to their own country with their daughters because of pressure from their family or community. Personally it reassures me to know that there will be a follow-up from the GAMS, that if the family decides to return with the child, even in a few years, we know that the GAMS will be there to advise the parents »

Parents are more informed than before about the legal aspect and the prohibition of this practice. The risk of returning to the country still exists and it reassures me to know that there will be a follow-up from GAMS.

Since the end of 2017, GAMS has benefited from a grant to strengthen the awareness-raising work on FGM in the ONE consultations of the Walloon Region (with a focus on Liège) and Brussels. The general objective is to prevent the practice among at-risk girls by raising awareness of parents or future parents during ONE consultations (pre-natal and infants) of the Wallonia Brussels Federation. In addition, the project also aims to raise awareness among parents and staff (MILAC – Intergenerational Artistic and Cultural Leisure Centre) and to support the work of PSE (Health promotion in schools) in the prevention of FGM (training of FGM representatives, partnership for EVRAS (relational, emotional and sex education) sessions. For this, two community facilitators were hired.

« For me it’s really very positive. I believe that this experience should be extended to other ONE consultations in Liège and other sub-regions concerned, such as Brussels. I hope that the ONE consultations in relation to the specific public will realise the interest of this collaboration with the GAMS facilitators. »