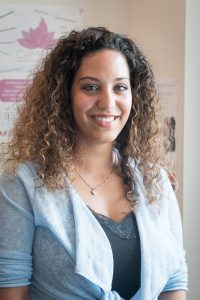 Athéna Patoulidis is a General Practitioner (GP). As part of her training, which she has just completed*, she wrote two reports on genital mutilation, aiming to better understand the role that GPs can play in the care of women who have undergone or girls at risk of FGM. Today she practices at the Centre Médical des Oliviers, in Molenbeek, as well as in family planning centres.

An unexpected confrontation with the problem of FGM

Athéna has just completed her specialisation in general medicine. As part of her studies, she completed a hospital internship in gynaecology. This is where she was first confronted with FGM.

When I saw her arrive, I immediately identified with her. When I understood the purpose of the operation – the deinfibulation – it affected me deeply. I didn’t expect it!

« One day, I found myself in the operating room with Dr. Caillet, a gynaecologist at the CeMAViE ** centre, for a vulvar reconstruction procedure. The patient was a young woman of Somali origin, who must have been about the same age as me. When I saw her arrive, I immediately identified with her. When I understood the purpose of the operation – the deinfibulation – it affected me deeply. I didn’t expect it!

I never imagined that I would face this in Belgium. I had heard about FGM before, but I didn’t know that it could be a reality so close to me, that one day I would be confronted with it in my work. I knew vaguely that infibulation existed, but for me it was a few cases in Africa, in the countryside, I didn’t know how widespread the practice was. It was an intense emotional shock at that moment. I felt helpless, I couldn’t talk to the doctor directly. This experience strongly challenged me. »

Thanks to this first confrontation with the reality of infibulation, Athena realized that she wasn’t sufficiently trained or prepared to take care of women affected by FGM.

«I am relieved to have been confronted with this when I was an intern, rather than afterwards in my practice. If I had faced it one day, during an individual consultation, I wouldn’t have known how to react. I thought it was fundamentally important for me to research the issue and that’s how I discovered CeMAViE, Concerted Strategies for fighting FGM and GAMS. »

The birth of a thesis

These meetings led Athena to question the specificity of the care and prevention of FGM in general medicine. She decided to dedicate her 7th year thesis (in 2016) to an assessment of the current state of knowledge of FGM and practices of care and prevention in General Medicine. « My main motivation was the need to inform GPs about this topic. » 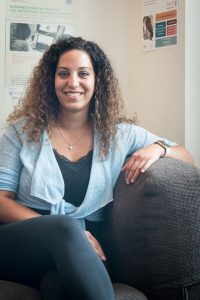 During her literary review, she actually found that publications on the topic of FGM in general practice were rare, compared to other medical specialisations. The organisation of focus groups bringing together GPs in Brussels enabled her to assess their knowledge and experience of FGM and to provide them with additional information on the subject.

« My main motivation was the need to inform GPs about this topic. »

« The results of our study show that most doctors were very interested in the subject but uninformed. They had generally not received training on FGM and did not consider themselves sufficiently equipped for diagnosis or care. On the other hand, it was difficult for them to know how to approach this delicate subject with the patients. »

« The first confrontation with FGM had often taken place during an request for a certificate of FGM or non-FGM, addressed to the GP, as part of an asylum application procedure. This totally unexpected reason for consultation generally took the doctor by surprise and raised many questions as to how to complete it and the legal implications of this type of certificate. Doctors questioned their role in having to complete such an administrative document, giving some a sense of having to be complicit in a “control” system, rather than fulfilling their role as caregivers.  »

At the end of each meeting, Athena gave a presentation on FGM and discussed existing prevention tools so that doctors would get a better idea of what they might adopt as a front-line attitude. « I did not find a management/support tool specifically for doctors. So I tried to group together a number of existing tools and summarise them in the form of a brochure containing key information for GPs. »

Doctors questioned their role in having to complete such an administrative document, giving some a sense of having to be complicit in a “control” system, rather than fulfilling their role as caregivers.

General medicine – a key sector for support and prevention of FGM

« In my opinion, general medicine is a key area for the support and prevention of FGM for a number of reasons. As a general practitioner, we are on the front line of a very large number of patients. We enjoy a privileged position to meet people, take the time to create a relationship of trust and ask them questions about their health. Prevention plays a central role in general medicine. This is one of the reasons I chose this medical specialisation, having always been interested in connecting with people and being able to deal with a wide range of medical and prevention issues. »

« We know that there is a large community concerned by the issue of FGM in Brussels: more than 8,000 women who have undergone FGM or are at risk according to the latest prevalence study. These girls and women are met by GPs in their practice. The doctors need to be able to talk to them about their potential care needs and to be able to enforce prevention to protect children at risk. »

« The preventive approach must be done several times. Indeed, some patients have received information, a leaflet, at some point in their journey, but the first time is not necessarily the right time for them and sometimes they’re not yet ready to speak about it directly. The advantage as a GP is that you meet the patient several times over a long period, which gives us time to repeat the information and see when the patient is receptive to the issue. The idea is to leave a door open for discussion, not to force things, so that one day patients can feel comfortable enough to discuss FGM, if they wish. I am convinced that GPs occupy a central role and have a privileged legitimacy to address the issue of FGM and to implement prevention. »

Comparing the experience of doctors with that of the women concerned

Once the first thesis had been handed in, Athena decided to continue her work. « I wanted to have the opinion of those primarily concerned, the patients, on their journey and their expectations vis-à-vis the doctor. » Her second thesis seeks to evaluate the medical demands and needs of patients affected by FGM and to develop an appropriate approach for detection, support and prevention in General Medicine.

Athena recruited 8 women and 2 men for individual interviews. One of the things that particularly surprised her is the ease with which she was able to recruit. « I thought it was going to be very difficult but eventually I had a lot more people than I thought. Some people told me very personal things, even though it was the first time I met them, and many told me that I was the first person they talked to about FGM. I think people realised that their experience was important and instructive to me, and it really motivated them to participate. »

« I decided to conduct interviews with men (from countries where the practice is common) as well, to learn more about their experience and their feelings on this issue. I found that the stories of women and men were very complementary. The men had many questions, about sexuality for example, which they dared not discuss with their partner, and vice versa.»

The results show that there is work to be done so that each woman concerned can be aware of possible care and know where to go for support. « In general, the therapeutic possibilities were not well known to the patients. I really tried to focus on this, to give hope to all the people I had the opportunity to interview and explain to them that as a doctor we are here to answer their needs and their questions, whether it is at the sexological level or to treat infections they may have … As a doctor we are here to talk about it.»

« The women interviewed mentioned a large number of the consequences of FGM on their health: genito-urinary complications were addressed by all, some had suffered from particularly difficult and painful deliveries and others had evoked symptoms of post-traumatic stress or sexual disorders such as lack of libido or sensations, as well as pain during intercourse. »

« From these interviews it emerged that the patients usually wait for the doctor to discuss the subject of FGM with them. They are in need of information and medical answers, but they will very rarely dare to speak spontaneously. If the doctor asks them the question, they will answer it. »

« They were also very positive about the preventive measures put in place to protect girls at risk, especially when they return to their country of origin. »

« That’s why I think it’s absolutely necessary that doctors be trained to be able to talk about it. »

Getting the GPs to discuss the subject with patients

Athena emphasises that the lack of training of general practitioners adds the delicacy of the subject of FGM, touching on intimacy. According to her, a very practical approach – on the words to use in a consultation, for example – could help doctors approach it better. « On my side, I had the chance to meet GAMS as well as the team of the CeMAViE** centre, so I could learn how to approach the subject with the patients in a concrete way. Whereas when one is alone in one’s office in front of a patient, it may seem more difficult. »

In addition, many doctors are unaware that they are likely to encounter women who have undergone FGM. « Since I became aware of FGM, I’ve realised that I meet women affected by these practices much more often than I would have thought. When the question of nationality isn’t raised, we don’t necessarily imagine how close we can be to people from countries where FGM is practiced. I realised that this group of patients is strongly represented especially in the neighbourhood where I work. » 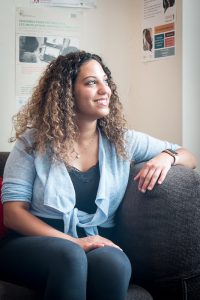 Today, Athena routinely asks her patients about their country of origin to find out if they are potentially from a community at risk of FGM. If so, she addresses the issue during a consultation.

« So far, it has always gone well. Sometimes patients ask me why I’m asking these questions and then I explain the research I did. In fact, they’re very interested. I try to do the same for other issues, to ask how the family and emotional life is going, and thus be able to detect other risk situations … »

Athena now wants to continue educating and training front-line doctors on support and prevention of FGM. During the presentations to the doctors she had organized as part of her research, she noted their great interest and many questions on the subject.

In the near future, Athéna wishes to publish her graduation work and will have the opportunity to present it for the first time during a training session for her GP colleagues planned in Brussels, at the beginning of January 2019.

* When this article was first published in French.