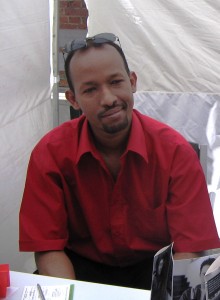 My first name is Xussen, my last name is Maxamed. I work at SIREAS NPO, for the department SID’AIDS Migrants, that deals with the issue of VIH/AIDS and other STDs. More than that, I am an activist and I work with the GAMS Belgium as part of the fight against FGM.

I am an active member of the GAMS Belgium since it was created in 1996. I followed its evolution throughout boards of directors, general meetings, but also throughout its quest to subventions for the workers, but also to achieve its objectives, and I followed them every time they moved. At the moment, I take part in the general meetings but I am also part of the board of directors, and as such I give my opinion, I share my ideas, in order to contribute to the improvement of its activities, its functioning.

When I have time, I take charge of activities for men. During those activities, we focus on the fight against FGM, female genital mutilation, but in a way adapted to men. Sometimes, I provide training to community workers who are interested or involved in the fight against FGM. The training courses consist of an intercultural approach on the one hand and on the other hand, of the techniques and ways to provide activities or training courses before an assembly/audience. Then, I sometimes give complementary information about STDs, if needed, and if people want it. Because there is a link between female circumcision and the transmission of the virus and other STDs.

Emergence of interest for FGM?

At first, a couple of friends made me meet Khadia (1). She told me what she intended to do: to create an association to fight FGM.

At the time, I didn’t work or study. So I told her “Well, I’m interested in it too. If I can help…” What I was interested in at the time, was the associative aspect. Because I was engaged in other associative structures and in the creation of NPOs, in the writing of statuses and so on. Then, Khadia offered for me to follow training courses. She asked me: “Do you want to campaign for this fight?” I said “Yes, why not?” Then, she proposed a training in Paris. We followed the training together, Khadia, me, and other people. That is when I discovered, consciously, the horror of FGM – because I didn’t imagine! – the horrors, with images and with the people who trained us, post-traumatic complications. I thought something insignificant was cut on the girls, and nothing more. That they suffered during the operation, if they weren’t given anaesthetics. And that then… it was forgotten. I used to compare female circumcision to male circumcision, but it has nothing to do with it. Boys only get some skin cut. The glans of their penis is not cut off. So, in my mind – and in the mind of a lot of people who aren’t aware of it – female circumcision equaled male circumcision.

During that training in Paris, I discovered the extent of the practice. I thought back on myself, my family and my culture. I remembered how things happened home. I have 5 sisters and 3 brothers. All of my sisters have been circumcised… and infibulated.

That is how I told myself “Well, it’s an issue that deserves more of my interest”, in tribute to my sisters who were mutilated. I thought that I would, if I could, then I definitely would help other people to avoid it – thanks to my presence or my fight against FGM. I would keep on campaigning, finding solutions to the structures working on this issue like the GAMS Belgium. It is right after the training that I engaged in the fight with the GAMS.

You are one of the first men to be part of the GAMS, how did/do you feel about it?

Back then, there weren’t many men engaged in the fight in an accurate and active way. In the General Assembly, there are a lot of men, doctors, or else. But in the field, like how I worked with Khadia, rising awareness amongst people, there weren’t that many men. So I took charge of raising awareness to men and boys, because it is an easier task for a man than it is for Khadia.

What I observed during my experience preventing FGM, is that… When I looked at all that was done at the level of prevention against FGM and when I took a step back, I had the feeling that everything was meant for raising awareness amongst women. In most of the books I read, I observed that a lot of things were done for women not to let their children, their daughters, undergo FGM. But I didn’t see, or barely did, actions that focused on men, dads. But I think that most of the societies that are affected by FGM are patriarchal societies. That is to say that men have the “power”, or the authority, officially or not. Therefore, they are the ones ruling the management of family and all that. And women implement the rules. So, I didn’t understand – and I still don’t – why we didn’t put as much energy, research, structures, people and work to do with men, to men, to see if there are no resources in them to fight against it.

The Daphne project (2) is going to deal with that. And I think that it will bring innovative results.

Does your status as a man have an influence on the people you sensitize?

I think that what makes my actions, activities, trainings with women easier, is that I am known to be part of the GAMS, to have been working in the domain for a long time. Psychologically, I feel comfortable dealing with the issue with women, because it is an issue I know. It gives me a good base and stability to express myself correctly with women. It is the advantage I have with women: I feel that they see me as a specialist of the question. That is what make it easier for me. But the difficulty is to work with men,  because such an audience isn’t used to deal with some kind of information. Such an audience is even surprised – and it happens often – that a man is pleading for women’s rights. Some make inappropriate comments like: “What the hell are you doing with these women stories? What the hell are you doing talking about vagina’s and clitorises with us? We have nothing to do with it! Leave it there, it is women’s problem!” So… it’s harder to get a prevention message across to men because men, from the beginning, think it’s women stories, and that us men are not concerned by it. My task, my work, is to say: “No! On the contrary, we are concerned because those women don’t exist on their own. They live with men, they marry them…!!! And we create women, girls!” So, my work, is that awareness-raising, and say: “In fact, NO, the idea that we are not concerned, that women have to deal with it on their own, is wrong.” This is why I say that it is more difficult during an activity to convince men than to convince women. But we do it in a “rough” way: when I see that a group is a little stubborn, I use the videos we have. Then they change their mind very quickly and become aware, and say: “Oh, it’s serious! But it’s true!” Some videos help me, at least with me, put them back into reality and because we don’t live in a world were women and men live isolated in separate groups.

You mentioned a link between HIV/AIDS and female circumcision. Can you tell us more about that?

The link that exists between FGM and preventing AIDS is what follows: when one practices female circumcision – excision of genital organs with sharp-edged tools – and that it is done at the same day and time on several persons, venereal diseases are transmitted. That is to say, HIV and other diseases of the same family. Through activities about FGM, and all that we explain about the complications and the consequences on the health of women and girls, I inform that there are risks to catch another girl’s disease. There is how two issues meet. It’s at the level of the practice itself.

But there are other consequences or other reasons why FGM can increase the risk of transmission of HIV, especially when it comes to infibulation.

Like everyone knows, the more the zone of penetration is dry, not lubricated, the more the risks of tear and bleeding increases. This is why we, in prevention against AIDS, say that vaginal penetration is less risky that anal penetration when it comes to the transmission of HIV. So there is a risk for the infibulated woman. If she tries to have a sexual intercourse with a man, well, this man will have it difficult to penetrate her vagina. But if he forces, and if the woman has attempts to penetration, little by little, and frequently, the little hole, through which her urine and menstrual blood get out, becomes bigger. Especially for women in Africa who try to keep it, for their “virginity” before their wedding. The hole left by infibulation is dry and narrow. Because of the tininess of this orifice, the rubbing and the attempts to penetration can cause small bleeding and multiply the risk of transmission of HIV. Sometimes, during those attempts, some women get desinfibulated in a brutal manner… These aspects cause an increase of the risk of transmission and infection of Sexually Transmissible Diseases.

(2) In January 2015, the GAMS Belgium will carry out a project for two years with England and the Netherlands. The project is called “Men Speak Out”, and will seek to mobilize men into the fight against FGM.