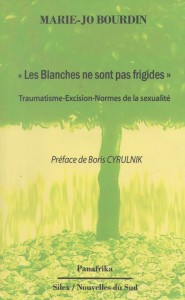 Social worker, with a master degree in Social Sciences, she works at the Student Guidance centre Fr. Minkowska, where she is responsible  of the training pole and of MEDIACOR. She also teaches “Health, Sickness, Care, Mediation and Cultures” in Paris Descartes. More than her titles and qualities, she is first of all an engaged woman who got her experience visiting affected countries and during consultations in those countries and in Paris.

Female genital cutting in itself, the consequences of it in short, middle and long term, treatments and possible multidisciplinary care, as well as an analytical reading of the provided care. Concrete clinical cases to illustrate.

This book is about the trauma linked to female genital cutting, the suffering of the people who have undergone it and the different components that turn the practice into a serious problem in public health. In the book, the author describes the process of reconstruction surgery as such. The stories are clear, simple, impregnated with respect of people in terms of relevant empathy.

The norm in sexuality is approached from different angles such as having orgasms like European women, being a real woman, allowing oneself to have pleasure, the sexual norm through the media, the need for reconstruction.

Becoming aware of the reality of female genital cutting, during migration for instance, also has heavy consequences (a woman can have a satisfactory sex life and then have difficulties when she becomes aware of the issue of FGM).

The point of view of Europeans is also analyzed.

Words that are used or that are taboo: “comma, white people surgery, etc.”

At the level of plastic surgery, it is described as an incontestable progress but reconstruction itself doesn’t repair. It can be “life-saving as well as noxious” (free translation), after support, there are as many women who chose for it, as women who don’t.  It is a long and difficult path, a psychological as well as physical reconstruction, in a quest for identity that is different in the host country than in the home country.

The technical act is called and described as plastic surgery because it is something new and not a return to an anterior state. It has to implicate a multidisciplinary process: medical, psychological, psycho-anthropological, sexological, surgical … it has to be handled prudently: it’s about breaking with the culture of origin and following a path towards integration. It is about information, pre-surgery assistance, post-surgery assistance, evaluation.

The clinical vignettes deal with very different situations at all levels (context, age, risks). No one is in direct physical danger or undergoing heavy pain.

This book is interesting because it is easy to read, which brings a sense of humanity to the reader.