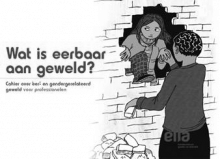 This booklet is about honour-based violence. The idea is to help the reader have a better understanding of the issue. The writers of the booklet discuss gender, culture, and the relationship of these two elements with violence. Then, they try to give a definition of “honour” and of “gender-related honour”. On the basis of these definitions, they plead for a culture sensitive help and for a crossing perspective. The booklet ends with advice for professionals.

Through this booklet, ella tries to deconstruct the prevailing discourse on honour-based violence and to emphasize the intricacy of the issue.

The writers of the booklet discuss the notion of gender, culture, and the relation that these concepts can have with violence. They first define gender as the social and cultural content related to biological sexual differences. Gender defines social and traditional roles, which leads to some kind of expectations, norms and images. These roles are context and time dependant. This is also the case of culture. Then, they state that gender violence is based on inequalities between men and women. But honour-based violence is said to be related to inequalities between men and women in minority groups of non-western culture. The danger of this definition is culturalization (“culturalisering” in Dutch): analyzing everything under the scope of culture. Ella pleads for an adequate approach of honour-based violence thanks to a crossing perspective: do not analyze culture and gender only, but take a whole context into account.

In the second part, the notions of “honour” and “honour-based violence” are defined. “Honour” is not a fixed notion: its meaning depends on the context. It contains a whole codex of values, notions and behaviours. It is also noticed that the first generation of immigrants is afraid to lose their identity and uniqueness in an unknown environment, so their idea of “honour” will become more radical. Honour-based violence is not a simple combination of honour and violence. There are a lot more elements to keep in mind, while honour only plays a role in the issue. One should not forget the influence of the political context, the immigration and integration policy, …

In the third part, the writers think of a way to give appropriate help. The professionals should not adopt a culturalizating discourse, which leads to stereotypes and further to limited communication. But culture should not be ignored either. Knowledge of the cultural and ethnical differences plays a role in the healing process: the more precise the knowledge of the victim’s cultural background, the better the process will take place. Also important is to avoid cultural relativity so that the victim’s issue is not seen as acceptable or normal because of their cultural background. In that context, ella pleads for a approach that is sensitive to the context. Professionals must keep in mind the plurality of the cultural background of the victim. Honour-based violence is a consequence of the crossing of different elements that are to be taken into account.

In the fourth and last part, the writers give advice for a more efficient approach of honour-based violence. They refer to the DASH-checklist (Domestic Abuse, Stalking and Honour-based violence checklist, see www.dashriskchecklist.co.uk). It is a tool for professionals: during their interview with the victim, they fill in a form which helps them identify the risks related to honour-based violence.

This booklet is an efficient introduction to the issue of honour-based violence. The writers of the booklet deconstruct the issue, and discuss the different notions that are related to it. Defining important ideas such as gender, culture and honour is necessary and provides a good portrait of the issue. The testimonies and examples are well-chosen.

But this booklet is written in a way that is too narrative to be a real guidebook. While reading part one, two, and three, the reader may think he is reading and essay rather than support for field work. The fourth part containing advice for professionals is too short and overall to be efficient. The writers plead for an approach that is context sensitive, but they give advice without any context. A few case studies would have been interesting.

I liked the booklet. Ella npo discusses an important and misunderstood issue. Everybody has already heard something about honour-based violence, especially in the media, but not everybody knows precisely what it is. The point of this booklet is to clarify the issue of honour-related violence. After reading it, I indeed know more about it.

Here is a passage I will retain:

“ When Jan kills his children to revenge himself against his ex-partner, or when Mia and Piet put their pregnant teenage daughter under pressure so that she commits abortion and keep their reputation clean, it is spoken of family drama. But replace Jan, Mia and Piet with Mohammed, Ali and Fatma, then it is spoken of honour-based violence. What is the difference, then? As usual, it is hidden in the perception of Muslims in the Western society. The cultural or religious background is almost always seen as a decisive factor.” (free translation) Testimony of Lahlali, 2010 (page 31).

I think that this passage says a lot, and that it is a good summary of the point of the booklet.

This booklet is useful to anyone who is confronted to violence in a multicultural context. The intricacy of honour-based violence issues is emphasized. Stereotypes are not a good tool to approach the issue. Each case is different from another, and the professionals must communicate with their victims to understand the intricacy of the situation.