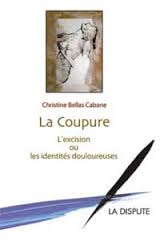 The author wrote her book in a comprehensive and respectful approach of the Malian society. As a doctor, she is opposed against female genital mutilation. She discusses this issue and the intricacy of it in her book. In the book, she goes beyond the scientific research that she conducted in the Republic of Mali and with Malian migrants in France. She also guides the reader through a socio-anthropological process.

The book is divided in two parts : « Africa » and « France ». It has a linear structure and gives way to dialogues between Malians living in the home country and Malians who have emigrated to France.

As she had been working in a cooperative project in a small town in Mali for a long time, Christine Bellas Cabane questions her priors and wants to know more and more about the people she works with. The topic of her thesis in Medical Anthropology was female genital mutilation, which sticks to her quest.

The book is full of dialogues and encounters with men, women, teenagers, traditional cutters, health professionals, mothers, grandmothers, religious people, intellectuals, villagers, … All the point of views (against FGM or not) are rigorously reported to shed light on the challenges of preventing FGM in the Malian society in the 21st century.

Throughout the story, the writer gives us keys to understand the practice of FGM in Mali and shows the (slow) evolution of mentalities. It sheds light on an important evolution in the practice that has digressed from the original meaning of the ritual (education, sexual differentiation of the roles, …) to only an identity mark (FGM done on young children, individually, without celebration with the community…).

In this first part, she also focuses on the legal aspect.

The last part of the book is dedicated to her encounter with the migrant community in France. Christine Bellas Cabane highlights different aspects of the personal experience of migrant women: identity crisis, sometimes reinforced because of partners, women, professionals of Western origin, loyalty conflicts and sometimes break ups…

The author describes the uniqueness of one’s path when one is confronted to Western health care. She also focuses on the possible repair that some may find in surgery. In this context, she describes her feeling that she sees a “scene in an inverted mirror. In Mali, FGM is above all maintained for the integration of the child in the group, the mark her affiliation, to shift from “I” to “us”, to humanize her in a certain way and, in this case, repair seems to be the opposite. From a knife to another, I couldn’t stop thinking, to mark a change in identity, to shift from “us” to “I”, in the wish of fitting in the norm of our society […]. The procedure had an essential symbolic value, which was to restore a subject identity to those who thought they didn’t have it” (free translation, p.181).

The author brings the reader with her in her African adventure, or rather in her round-trips between here and there. She shows her approach as an intervener. She stands for the health of girls and women, thus against the practice of FGM and its consequences in the long, mid- and short term. Nothing in her story is left behind: her questions, her priors, her attempts, her efforts, her mistakes and her mind opening thanks to contact with others. This book focuses on a possible encounter where words liberate.

Christine Bellas Cabane positions herself ethically and professionally, full of understanding and respect for the others :

“… ethnology isn’t used to justify everything, but to understand, to take distance from one’s own certainties, one’s own values, in order to understand better those of the others. But it doesn’t mean absence of convictions. Looking at the other without judging him allows one to encounter him, to talk to him, to arouse his interest, not to withdraw in a defensive posture, in a sterile radicalism. It is not a technique, it is a posture, a way of being that comes with knowledge and reflection. (…) The challenge is huge. It’s about one’s relationship with the Other, may he be close or far away. All the people who work with families here and there know that it is important to know and recognize people in their humanity, even if their way of thinking seems strange (…) With clumsy behaviour, one may reinforce retreat in cultural identity, which reactivates the practice of FGM. Notice that it is important to show what is prohibited, but don’t be confused between prevention and repression. It is important that women may talk to someone without fear of being reported. As in all prevention processes, preventing FGM cannot be done without insight in the whole personality of the person. We don’t protect clitorises only, we protect girls. We should not forget that.” (free translation, p.225-226)

More than that, the book is full of advice and recommandations for the implementation of a prevention project.

As a professor and citizen, I liked reading this book in many ways.

I am sensitive to the author’s approach that is engaged, rigorous and scientific, as well as to her attitude in the encounter with the other.

This book seems to be an interesting first reading for any person and any professional who are interested in the issue of FGM and who is confronted with people affected by it.

The videos were filmed during the literary café in Liège, on 7th February 2015 (in French).