The European project “Men Speak Out” was conducted in 2015 and 2016 in three countries, Belgium, the Netherlands and the UK, and coordinated by the GAMS Belgium. Its aim was to include men from the diasporas, living in Europe, in the fight against female genital mutilation. One of the components of the project was the training of fifteen men from communities practising FGM in each project country who became peer educators and got involved to raise awareness of female genital mutilation in their communities. We gave the floor to, Idrissa, one of the men trained during the project.

« I’m Salou Idrissa, from Burkina Faso. I’ve lived in Belgium for 3-4 years. I live with my partner and we are the parents of an 11 month old girl. »

What made you decide to campaign against FGM? 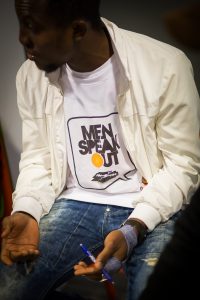 « Before I met my partner and learned about GAMS I thought that female genital mutilations were normal and good practices for girls. My partner had undergone this mutilation and it was when I saw what she was going through that I realised the consequences. I don’t want my daughter to suffer like that! Also, I think that men have a role to play in the fight against FGM. »

« I often hear misconceptions about excision and during the course we learned how to counter them. There are people who say that female genital mutilation is mandatory in the Muslim religion, that it’s inscribed in the Qur’an. Maybe their parents or Imam told them. But we learned that these practices date back to the antiquity. And the Saudis or Moroccans don’t have their daughters cut. So, what some say about religious obligation, it’s not true! There are other examples of false information, stereotypes, which are used to justify the practice and push people to continue it. We have learned to counter these arguments and also to remain calm and not get angry when facing people who are difficult to approach. »

Why do you think some people are so attached to FGM?
« Because they don’t really know or understand it. In my opinion, it’s the selfishness of men. Some men want to be above women, they say ‘ cut the woman’s genitals, her clitoris, so that she is not like us because we have our genitals on the exterior and those of women must be hidden, so she won’t have too much desire and sexual pleasure. We hear plenty of things. » 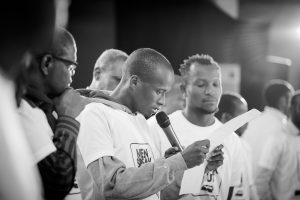 The MSO educators are reading their declaration in support of women who are fighting against FGM, November 5th 2016 (photo Bea Uhart)

« In my country, Burkina Faso, it’s often said that FGM is only a woman’s issue. Sometimes they cut your daughter without you even knowing. But men also have to show an interest. Not wanting to acknowledge what is happening and doing nothing to oppose it is also a way of consenting to a practice. It’s like if someone is attacked on the street and you do nothing about it. Not to act is also a form of action, if you don’t object, it’s like you’re in favour of the practice! It’s failure to assist a person in danger… FGM, is not only a women’s affair! Men have a big responsibility for their children – girls and boys – and a responsibility in the fight against FGM. They must take responsibility. I am sure that if men were really opposed to FGM, women wouldn’t do it, not even in secret, because they would not want to have problems with their husbands, brothers, sons… If we, the men, faced up to our responsibilities, it would be a big step in the fight against this practice. »

According to you, what are the main obstacles to the involvement of men in the fight against FGM?
« For me, one of the main problems of our communities [Burkina Faso] is the lack of communication on intimate subjects, like sex or FGM. When raising awareness some Belgians say it’s the same in Belgium and that some couples don’t communicate. In any case, I see it in my community and particularly in the context of FGM. I think the taboo around sex is a big problem and is particularly the case for FGM. Men need to know the harmful consequences of FGM, which also affects the women in their surroundings. »

« We hear men say that uncircumcised women are better partners, because they give 100%, but I tell them then fight against FGM! Cut women may need more attention and communication. The men need to show a good example, if a husband doesn’t respect his wife then the son won’t respect his future wife. »

« Before taking the training course I didn’t talk about sex with my wife either. Today that has changed, we share our experiences and information, we correct each other, we tell each other everything. The training made me realise that good communication is crucial, without this we’ll never see the end of female genital mutilation. Even if it it’s hard at the beginning, over time you get used to it, you have to try! »

« The training helped me a lot by teaching me how to communicate with people. I sent people to GAMS. I felt that I had really helped people, I have participated in protecting girls from FGM. I’ve encouraged couples to go and see a sexologist. I also learned to know myself better and trust the information I had. »

Did anything in particular strike you during your awareness raising work?
«I managed to convince an “old brother” [older man from the same community], who had lived in Belgium for a long time but had no information on FGM. I didn’t think that I would succeed in convincing him of the harmful consequences of FGM because talking about this with someone older, who, in addition, knows Europe more than you…First I went for a weekend, then another, it lasted six to eight weeks… Finally he came here with his wife, and he had a daughter and he signed the declaration of honour to keep her intact. It really struck me that I was able to convince families like his, which I never thought I would be able to reach. » 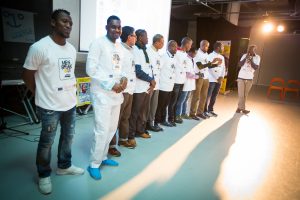 « Two major events were also particularly important to me. The first is the conference on female excision and sexuality, organised in September 2016 by the Concerted Strategies on FGM, for which our project was a partner. It was great, I was really positively surprised to see that there are so many people from different backgrounds, including ‘Belgo-Belgians’, who are interested in this topic. The room was full! There were a lot of questions.

The second event was the closing party of the Men Speak Out project, on the 5th of November [2016]. I loved seeing all the people and the stakeholders who believe in and support us. »

What is your strategy when you come and speak about FGM with a group or an individual?
« I never address the subject directly. I always pass by other paths. First I explain that I am sincere and want to give information, to help people take care of their families. The first time I meet a person is sometimes a little difficult, people are reluctant to talk about these issues. It’s more difficult with men who are older than me, including religious men. When I meet the same person several times it becomes easier. »

What’s next for you and your work against FGM?
« The training is over, the MSO project has come to an end, but I continue my actions to raise awareness. We were trained to always continue. I’ll still be here to help the GAMS when they need it. Furthermore, I work as a volunteer for the NGO SIDAIDS, with HIV/AIDS screening among migrant communities. »