We met Pauline Ikongho, nurse at the Fedasil centre in Rixensart and “FGM adviser” in the framework of the project “Trajectory FGM” of the asylum and migration fund (FAMI). This project, coordinated by GAMS Belgium and conducted with the NGO INTACT, was set up to ensure adequate care for all female asylum seekers affected by excision.

A long time spent abroad before settling at a reception centre 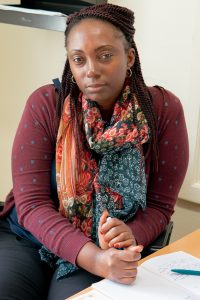 Pauline worked as a nurse abroad for many years. Her career began in the Congo, notably with a mission for MONUC, the United Nations Mission in the Democratic Republic of Congo. She then spent three years in East Timor, working in the United Nations (United Nations Mission in Timor-Leste, UNMIT). After years abroad Pauline returned to Belgium where she enrolled in a Master’s Degree in Public Health. Attracted by the multicultural aspect, she began to work at a reception centre for asylum seekers, first with the Red Cross and then at a FEDASIL Centre.

« I wanted to work in a reception centre because I really like things on the humanitarian and the international side. Hospital work didn’t interest me much. Here I enjoy the multicultural side, working with people from all over … I’m very interested in this! »

An active Centre when it comes to social and health issues

The reception centre in Rixensart is mixed and has a capacity of 170 residents. The community is quite diverse, for the moment there are, among others, Syrian, Guinean, some Somali women, Mauritanians or Eritreans living there.

« Here in Rixensart we have a wing reserved for the  Unaccompanied Refugee Minors (URM), this is our specialty. And among these minors there is often pregnant girls or young mothers … There is also a nursery, with nursery nurses, for mothers who give birth, especially for young people who must return to school. »

There are significant sexual health needs in the centres. 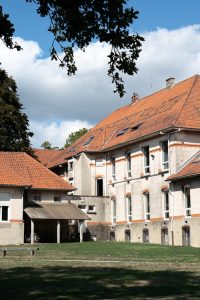 « We work closely with the social team. On the medical level, there is always a lot of people, even when there are no doctors. The residents arrive from different countries each with their own personal story, different reasons that push them to leave their own country and various journeys leading to exile. They often in tune with their bodies and somatising by expressing many small or bigger problems. In addition to the usual problems encountered for most people, there is also a great psychological component. They think a lot about their future in a new country, and have to coexist with the traumas of the situations in their country of origin, the difficulties encountered during their long journey to Belgium and doubts for the future … The Centre does not have psychologists working internally but, we have two independents who come to consult once a week and we also works with partners such as Exil or SOS Viol… »

« There are significant sexual health needs in the centres. We are really trying to get the message of protection across, not abstinence because people have their own lives and of course, they choose what they want to do. The information is given to the residents, they are offered contraception, after which it’s the people themselves who decide. »

Awareness of the consequences of FGM

I saw a lot of women who had FGM-related health problems and also women who felt really bad because of it, who suffered a lot…

Before working with asylum seekers, Pauline was not familiar with the practice of FGM. « I asked ‘what is FGM’? Because in the Congo we don’t have FGM, I had never heard about it… »

When she started working at the Red Cross in Jette, she was confronted with the health problems of resident women who had undergone FGM.

« I became aware of FGM in the Jette Refugee centre because I saw a lot of women who had FGM-related health problems and also women who felt really bad because of it, who suffered a lot… As the only nurse in the centre, I thought it was an important topic and I wanted to learn more to try to help those women who needed support and help but who are, at the same time, locked up in what is considered a social norm. »

The « FGM Trajectory » seen by a focal point

Pauline had the opportunity to do a training course on FGM at GAMS, giving her the necessary knowledge to care for affected women. When the Rixensart centre had to choose an FGM focal point for the project led by GAMS and FEDASIL, it was logical that it should be her.

Now my perception, my way of thinking and support facing a situation concerning FGM has changed

« The FGM trajectory has been put in place to help female asylum seekers, when they arrive, so that they know that there is support for them, for all the problems related to excision. Some come with girls who are still intact or who give birth in Belgium, there is a lot of prevention work to do at this level. I find this project very useful and important. We have the same guideline for everyone, “the journey”, everyone can follow the same approach, in all centres women are supported in the same way. And even for those who move and change centres, follow-up continues to be the same. »

The FGM trajectory project also provides for intervision between advisers so that they can exchange cases and experiences. For Pauline the moment of exchange with the others was really beneficial. «There were a lot of people at the meetings I attended, almost everyone was present, and for me that shows the motivation of the focal points and the importance of these meetings. » 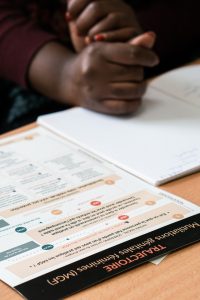 Pauline believes that her approach to dealing with women affected by FGM has changed significantly since she was trained on FGM. « In the beginning when I started at the Red Cross, if I had a woman who came with, for example, regular urinary or vaginal infections , I couldn’t have known that it could be related to her FGM, especially since they never spoke about it and I didn’t know anything about the issue. Now, my perception, my way of thinking and my handling of the same situation has changed; I will think of an adapted caring facility, such as CeMAViE. »

At the Centre Pauline regularly meets women affected by FGM. « Among the unaccompanied minors and women there are many Guineans, and some Somali women, the majority have undergone genital cutting. The prevalence map helps to identify people who may be affected, including those communities with lower prevalence. Since I’ve been here, there’s only been one Ivorian woman here (where the prevalence rate is between 25-50%), and she had been cut. So we have to be really careful even for those countries where they say there’s less of a risk… »

« Today I can easily raise the issue with people. However, I don’t do it the first day they arrive. I think it’s a bit brutal and intrusive to talk about genital cutting and sex because, the questions are still very personal… I let people settle in, get acquainted and confident with the medical service. Two or three weeks later, I invite them to come back to the service to talk a little about FGM, I ask them ‘what can you tell me about your country, do you know the practice?’ I approach the subject gently to get to ask more personal questions, ‘and you, are you cut?’ If there are children, I also ask if the girls have undergone the practice, if the parents would like to do it. »

« This does not preclude FGM as a deeply entrenched social norm, and deconstructing it may take time. I have the impression that some people, although opposed to the practice for their daughter, are reticent about completely rejecting it. For example, I met a woman here, one of her daughters, who had not been cut, had urinary incontinence. In the mother’s mind, having been influenced by the other women of her family and country, her daughter was cursed because she was intact. I wondered how I could make this woman understand that excision has nothing to do with all this, and that her daughter has incontinence because she probably had a different medical problem.  If medical care cannot quickly solve this problem, is not there a risk that this mother, highly educated and personally against the practice, will return to excision to try and remove the curse?

Nevertheless, I am positively surprised because I thought it was going to be almost too much of a shock for the patients to discuss it, but it’s rather easy … In my experience, most women don’t hesitate to talk their experience, to discuss it, to know if there are possibilities of support, and to have discussion groups, a psychologist if they have a problem … I also feel that it’s a great relief for them… I was also pleased to see that three men from the Centre agreed to participate in a men’s group against female genital mutilation…»