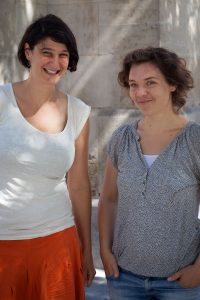 We met with Pauline Soupa and Mathilde Borcard, volunteers at the «Prenatal Workshop» at GAMS in Brussels.

Pauline Soupa is a midwife.  She is currently working at CHU St. Pierre as well as the midwives’ practice, “Le Framboisier”, and joined GAMS as a volunteer in 2011.

Mathilde Borcard is somatic practitioner, trained in Berlin where she graduated in 2016. She is the founder of the non-profit association “L’Estime” and joined the “pre-natal team” this year.

How did you become involved in the pre-natal workshop ?

Pauline: « After an initial meeting with GAMS, during a conference, I started to participate as a volunteer in the monthly workshops “last Friday of the month”. The topics addressed by the women attending these workshops often concerned perinatality and I found that the preparation for childbirth they had access to as precarious migrant women was mainly medical. They do not have a place to tell their story, their migratory journey, the fact that they have undergone genital mutilation and often other types of violence. The Director of GAMS, Fabienne, herself a midwife, had the idea to set up a workshop to remedy this. »

As a result, in 2012, a group of midwives became engaged in a “Pre-natal” workshop for migrant women who had experienced FGM and/or other forms of violence.

Questions raised by women in the Workshop

The women who participate are usually asylum seekers, sometimes regularized or, on the contrary, undocumented. The majority are Guinean, but there are also Eritrean, Djiboutian, South Sudanese, Sierra Leonean, Nigerian and Burkinabe women. The majority are alone in Belgium, the father of the child is not present in most situations.  For some, this is the first pregnancy, others already have children.

Pauline: « We quickly had to adapt our initial idea to the reality of the communities that come to GAMS. It is not possible to have a series of workshops where each woman participates throughout her pregnancy. Some women come when the pregnancy is already well advanced, some only once or twice, others for every session. It varies. »

Each workshop focusses on the questions and needs of the mothers-to-be present that day. They all have in common sexual or physical violence, almost all have undergone excision.

Mathilde: « Some of the women don’t speak French. However, the workshops are done without the presence of a translator. A self-help system is often put in place, where one woman translates for another. Sometimes we use Google translate on our mobile phones so we can talk to Eritrean women in Tigrinya.»

The midwives are there to answer women’s questions about pregnancy and childbirth. In particular, they explain what happens during childbirth in a Belgian hospital as it is often very different from what they are used to in their country of origin. Sharing experiences is a central aspect.

Pauline: « Women share tips specific to their country of origin, things we wouldn’t know. As midwives, we are here to give information, to address more medical concerns, but their knowledge is important and the workshop also serves to enhance it. The workshop also has a very strong social function for women, it is an opportunity for them to meet others from the same country, to speak their language.»

For any transmission of “medical knowledge” the midwives try as much as possible to adapt to the reality of the participants.

We never speak in terms of obligations: “You have to do this, you have to do that, it’s necessary for the baby…”  We start with the women’s resources, what they know. We value it.

Pauline: « Women who participate are often precarious, the asylum centres give them food which is not always adapted to the specific needs of a pregnant woman. In any case, we never speak in terms of obligations: “We have to do this or that, it’s good for the baby…” We are really trying to see what their resources are, starting with what they know and value it. » 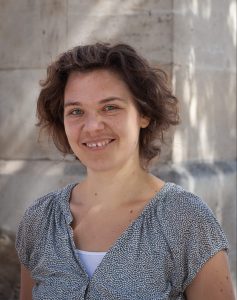 Mathilde: « We are also thinking in terms of resource mobilisation around women, how their community can support them rather than putting all the responsibility on the individuals. For example, a lot of women don’t eat enough. We try to encourage them to leave the workshop with food. »

At the launch of the workshop there were, in addition to midwives, two psychologists in the group. Then a massage therapist joined the team and introduced the body approach for the first time. Today this body workshop is maintained thanks to the presence of two somatic practitioners, Mathilde, and an osteopath. The session takes place with collective groups and individual work simultaneously.

The goal of the body workshop is to allow women to be in contact with their body, with their experiences and all that changes during pregnancy.

Mathilde: « As a somatic practitioner, I work on the somatic consequences of psycho trauma. I concentrate mainly on chronic pain and anxiety. The goal is to get people to be OK with what they feel, rather than being in resistance, and to feel safe in their own bodies. Much work is being done on the mechanisms of resistance and the mechanisms of survival, which are put in place especially for people who have experienced trauma. The purpose of the body workshop is to allow women to be in contact with their body, with their experiences and all that changes during pregnancy. »

The place of FGM in the pre-natal workshop 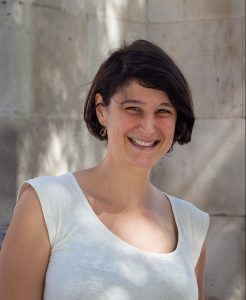 While almost all participants in the pre-natal workshop have undergone excision, the facilitators do not focus on this aspect during the workshop. However, it is important to respond to the women’s questions and fears.

Pauline: «They are already experiencing the consequences of FGM, and they know more about the issue than we do. But many women have misconceptions about excision and childbirth. In particular, that an excised woman will inevitably be torn apart, undergo an episiotomy or experience other complications. They are often very afraid of childbirth. We try to have a positive, encouraging, reassuring dialogue. »

Among the consequences excision can have for a pregnant woman, there is a higher rate of anaemia than in other women. This is can be explained by the fear of having a large baby – which would be harder to get out – and therefore a restriction on food and sometimes deficiencies.

Pauline: « We are still seeing, although fewer than before, that there are some gynaecologists and midwives who are not familiar with the issue of FGM. They are sometimes lost. It is rare, but some doctors automatically offer caesareans to infibulated women. »

Mathilde: « Sometimes there is also the opposite problem, professionals who minimize the consequences that excision may have during childbirth.»

In order to make a link between the workshop and the care services, each participant receives a letter that she can (if she wishes) transmit it to her gynaecologist and / or midwife, where it is explained that the person participates in the pre-natal classes at GAMS and that the professional can contact GAMS in case of any difficulties or questions.

The empowerment of women, in terms of their ability to be heard by other health professionals, and at the corporal level, is one of the priorities of the workshop.

Pauline: « We tell them, “if you have a question, don’t hesitate to ask your doctor or midwife, you have the right’ »

Discussing norms and rituals around birth

In all countries there are rituals around birth. Preparation for childbirth provides an opportunity for women, and volunteers, to discuss the rituals in their cultural context.

Pauline: « Some gestures or practices are related to cultural background. For example, clicking the fingers at the peak of childbirth, as a mode of pain expression. »

Mathilde: « We learn from them, it’s amazing! »

It is also an opportunity to explain to the women the standards in force in Belgium, and to help equip them in case they want something other than what is generally proposed. For example, in Belgium there is a tendency not to wash the baby directly after the birth, because it helps them to maintain their body temperature. But for Guinean women it is often important to wash the child quickly after birth because of the belief that otherwise he or she will have a bad odour their whole life.

Pauline: « We explain to the women that it’s not because it’s not the usual practice in Belgian hospitals that they don’t have the right to do so. They’re told, ‘If it is important for you to bathe the baby after the birth, you have the right to say so to the hospital’s medical staff, it won’t harm your baby, we only ensure that the baby maintains a good body temperature’. »

Another example, some women are embarrassed by the repeated blood tests during pregnancy because they have the impression that too much blood is being taken when they need it for their baby. It is a big difference from their country and often no one has explained, or they have not understood, why we do that.

« It is absolutely necessary that all pregnant women have access to information and a real ability to choose what they want. Allow a true Yes, or a true No. But often, the medical profession does not take the trouble or does not have time to be sure that the person has understood what will happen to her or what is being proposed. At the workshop we take the time to explain. Understanding everything changes for women and gives them a real choice. »

Which are the prospects for the workshop?

Currently the Pre-natal workshop runs thanks to GAMS own funds, there is no specific funding for the activity. Thus, all the professionals who participate in the workshop are volunteers, which causes a significant turnover. In the future, the group hopes to be able to count on more structural funding to ensure the sustainability and quality of this important support for women.

In addition, based on the experience of the pre-natal workshop and field observations, the team of midwives and GAMS plan to set up a workshop for professionals around the identification of vulnerabilities in pregnant women. This workshop will be organized within the SC MGF and should take place in autumn 2019…