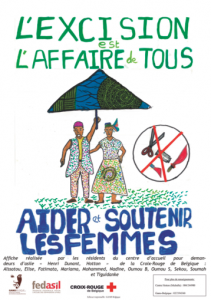 A2 posters featuring prevention messages to:

Down every poster, there are the names of people who participated in the project and the name of the centres that received the project. 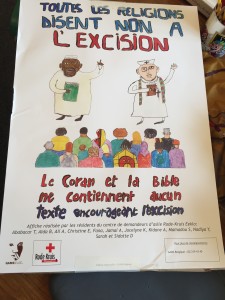 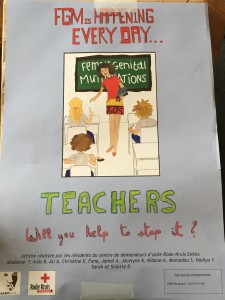 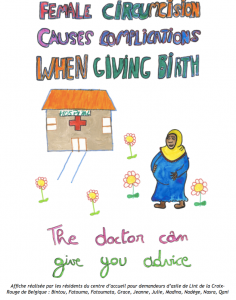 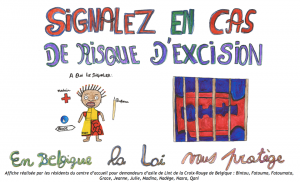 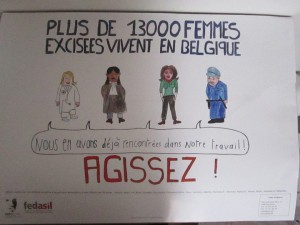 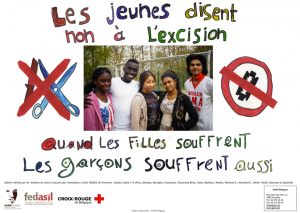 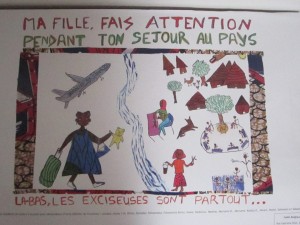 Made in 2013 at the centre of Hotton (Belgian Red Cross), by Aïssatou, Elise, Fatimata, Mariama, Mohammed, Nadine, Oumou B., Oumou S., Sekou, M’Balia and Tiguidanke. 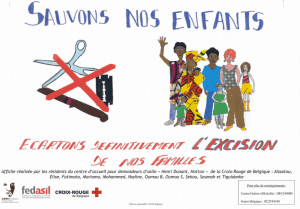 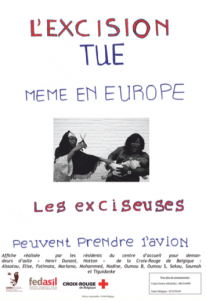 The idea of the project “creating posters” appeared thanks to the following statements: the already existing posters were not always understood by people who cannot read the language(s) of the host country AND the symbols/drawings are not necessarily compatible with the target audience.

GAMS Belgium has imagined a methodology for residents in the centres: they participate in 4 or 5 days of information and training course about FGM and poster creation. At the end of this stage, the participants are told about FGM. They also receive information about how to create such posters and what is important in the process of it.

This project is led in Belgian Fedasil centres. The GAMS team stays in the centre until the posters are created. That way, they can experiment the life of the residents. So far, the project has taken place in 3 centres: Hotton (Red Cross), Lint and Florennes Fedasil.

After being created, the posters are printed. The GAMS team goes back to the centres in order to show the final work to the participants and discusses the distribution of the posters with them. The idea is that the creators of the posters can take them over and promote them to different kinds of audiences and institutions.

The objectives of the project vary according to the audience:

Residents of the centres:

Stick the posters up in places that are frequented by anyone who would be affected by the issue such as medical centres, reception centres, Family Plannings, Social streetwork for the benefit of youngsters and children (AMO), Social Services of Promotion of Health at school (PSE), Student Guidance Centres (PMS), Office for Birth and Childhood (ONE), etc.

The supporting association GAMS Belgium has developed a specific methodology, as the responsible editor of the posters.

The project is subsidized by the Federal Agency for Asylum Seekers (Fedasil).

You can order posters by sending an e-mail to Marie De Brouwere, coordinator of the Conserted Strategies: scmgf.be@gmail.com

The posters are available in the participating centres.