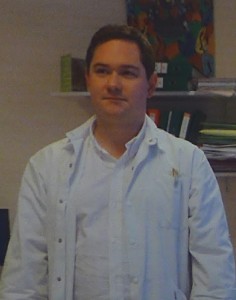 My name is Martin Caillet. I am a gynecologist at the hospital complex “CHU Saint-Pierre”, I have been for 8 years.

From the appearance of my interest for FGM…

I am fortunate to work at the CHU Saint-Pierre, which is particular in the sense that in relation to its location (the centre of Brussels) and to its history, it takes care of destitute people. It is one of Saint Peter’s characteristics. This why I have immediately been in contact with patients from countries where female genital mutilation occurs.

During my schooling to be a gynecologist, I have been proposed to give a presentation about this topic. Since I had been confronted to it while working at the hospital, it appeared very interesting to me. From then on, I have been implicated in different processes. First, my colleagues began to send their patients to me. Then, I went to talk around about it. I was invited to the Superior Health Council in 2008 in the context of the research about the relevancy of clitoris reconstruction, which was asked by the Minister of Health, Mrs Onkelinks. This is when I met Fabienne Richard(1), and we kept on working together.

The Superior Health Council submitted an opinion in Augustus 2009 and asked for the refund of surgery and multidisciplinary support (sex and psychological therapy) since we, in the commission, were convinced that  surgery only couldn’t suffice. Time went by but nothing happened, so we decided to be proactive and to send a file to the INAMI/ RIZIV (Federal Institute for Health Insurance) (2), asking for refund. Some members of the commission and I set up a file and presented it. They weren’t that enthusiastic. They asked us to evaluate in numbers how much such care would cost. One thing led to another, the file came to people having the expertise and the power to get things moving.

The miracle took place in February 2014, when we learned that a refund would be possible, the way we wanted it, that is to say in accordance with the recommendation given by the members of the commission of  the Superior Health Council. What we wanted from the beginning: not the refund of the surgery, but the refund of a global medical multidisciplinary support that is above all a sexological, a psychological and a medical support. And that surgery for reconstruction of the clitoris, should be refunded only if the woman really needs it. So, what we wanted, was support for the person, entirely, including surgery if necessary. And that’s what we got.

… to the creation of a multidisciplinary centre

Then, I had to assemble the team: I was obvious for me to work with Fabienne Richard on this new project. Fabienne had worked for years with

circumcised women in Africa, which makes the contact with patients easier. Her experience at the GAMS Belgium (3) allows her to create a bridge between the hospital and the associative sector. We already had had the opportunity to work together in the context of a campaign in the hospitals, and we work well together.

I inquired about people in the hospital who would fit in the team. I learned that a new subsidiary to deal with pain just had opened in the hospital. A psychologist specialized in pain, Sonia Zeghli, accepted to participate in the project. She proves to be very efficient in helping our patients. Because she is very interested in providing care in the domain of pain, and she reads and enquires a lot about it. She has a good influence on her patients. At the perineum clinic, we have the opportunity to work with Cendrine Vanderhoeven, a midwife and sex therapist. I also contacted her and she was ready to help. That is how our team of four is born. I can say that I have been working here every Tuesday afternoon for more than 6 months.

The care philosophy of CeMAViE relies on a multidisciplinary support that is very topical in medical care. A lot of pathologies are now dealt with in a transversal manner, by different specialists at the same time. The idea is to avoid that the patient goes to different doctors throughout a few months. When the problems are related to one another, we try to make doctors see their patients here. In other words, doctors move and the patient doesn’t instead of the usual opposite. This is why I decided to settle in the perineum clinic which has been devised for multidisciplinary community care.

At the moment, on Tuesdays afternoons, we work together: Fabienne, Sonia and I in the same hall. So we communicate easily. As soon as it is possible, Cendrine will join us. This is exactly how we want to work. It would be a lot more complicated if Fabienne saw the patients on one day, I on another day, and Sonia on a third day. Communication, in multidisciplinary support and in medical care in general, is a recurring issue. This improvement of quality of communication is an enormous advantage, for the patients but also for the staff, who can transmit information directly. There is less transformation, less loss of time. It truly is perfect.

Creation of a little cocoon

We benefit from the communicational infrastructures of the perineum clinic. But it’s a care space that was thought up like an isolated space, protected in the hive of activity that is the hospital Saint-Pierre. We wanted to take our little patients away from the uproar of the city, so they can confide their private problems like incontinency, organ descent, pelvic pain, anorectal disorders, etc. in the context of the perineum clinic. And it matches what our patients who have undergone FGM would like. They deserve, just like any other patient, optimal intimacy. And some are in difficulties when coming to CeMAViE, regarding the members of their community. We can also offer them intimacy on that matter; they can take refuge in our premises. If they don’t want to be seen by pregnant women and by members of their community walking in the hall, away from the prying eyes, and professional confidentiality and intimacy is also preserved at that level for the ones who want it.

How does reconstruction fit in the centre?

We are not a surgical team. For us, surgery is a means, not an end. We try to help people without operating. However, it is sometimes necessary. But one has to keep in mind that the support is done essentially by a midwife, a psychologist, a sex therapist, and that the medical supply is essentially a gynecological one.

A minor surgery brings no difficulty. But for clitoris reconstruction… it’s like a trial. It’s difficult, and recovery is a long and painful process. And I think the idea of a simple and easy miracle surgery resolving every problem should be ruled out. Because in real life, that is not how it happens. In real life, it’s something complicated and needs a lot of courage and patients have to be strong if they go through it.

What kind of communication was done around the opening of the centre, in Belgium and in France?

Regarding communication, for now, we didn’t really communicate. We didn’t organize an inauguration ceremony in the strict sense because we

knew that there would be a Royal visit… In the context of the opening of the centre, I had appealed to Queen Mathilde, I had met her when she was still a princess on the occasion of Women’s Day. She takes a real interest in the status of women; she is involved in this issue, also at an international level. So I asked her to be the patron of our centre. Which she accepted. In the context of that patronage, she announced that she would come and see what we do. We agreed that this visit would take place when the centre would have been launched. Communication will thus be made through this visit which takes place on the 28th of November.

More than that, we sent a number of brochures to the different Family Plannings, to centres, and to affected people, so that they know we exist.

As for France, or for our situation regarding France, word of mouth begins to work. We stay connected to a few French centres, they know that they can redirect people to us. So it’s in progress…

The centre raises questions, especially from the target audience, they would like to visit it…

We are an open structure: anybody can come to visit and meet us. If they are health professionals or workers in the domain, they can assist to our meetings, there is no problem. There are a whole lot of interns coming to us, including interns studying sexology. We recently decided that the amount of internships should be limited, because in the end patients and permanently confronted to interns and we should respect their process. Except that, we are pleased to welcome people and are very proud of what we’ve created. We are pleased to show photos and show it around.

I think there is a major problem. At the moment, the support is refunded only for people who have health insurance. We couldn’t obtain a support from the INAMI/RIZIV (Federal Institute for Health Insurance) for women without health insurance. My new project (now that this one is almost accomplished) is to try to find a funding scheme to help women who have no health insurance. Most of the people coming here have no proper documentation. The organizations that support our patient  pay costs of the consultation with the gynecologist. But they cannot have support for consultations with a psychologist, a midwife, or a sex therapist, while most of the time they need it more than a medical consultation. So here is the second step of the project, it’s an important step because it means a lot of money. I still don’t know well how to do it. I will probably have to find private funds, maybe from government departments, maybe European funds. I don’t know.

It is easy to find money for research, but to take care of people, it isn’t. So here we are. But the project would be to offer, to anyone knocking at our door, the same support, without specific conditions. In my opinion, it is achievable, because even if it seems to be a lot of money, at first… there are not that many patients. So, in the end, it should be possible. But will it work over time? I don’t know. In any case, this is the project: same care for everybody. No distinction.

I also have another project, broader: extend the support to women who have undergone violence in general. Yes, this is my even greater project. But, well, one person has to do one thing at a time.  But it is true that this multidisciplinary care, it is something that is done at a lot of places obviously, and it is, in my opinion, very efficient. So, why focus only on excised women? There are also women who got raped, who… well; there are different kinds of violence undergone by women every day. There are obviously a lot of places where they can get help, but… I like this idea of many of us sitting at the same table. Doctors often stay with doctors, and others work together. So I like this idea that we sit at a table and discuss together. Because it brings about so much richness…

1) Fabienne Richard, midwife and doctor in Public Health, member of the team of the medical centre of help to victims of female cirumcision (CeMAViE), is also the director of GAMS Belgium.